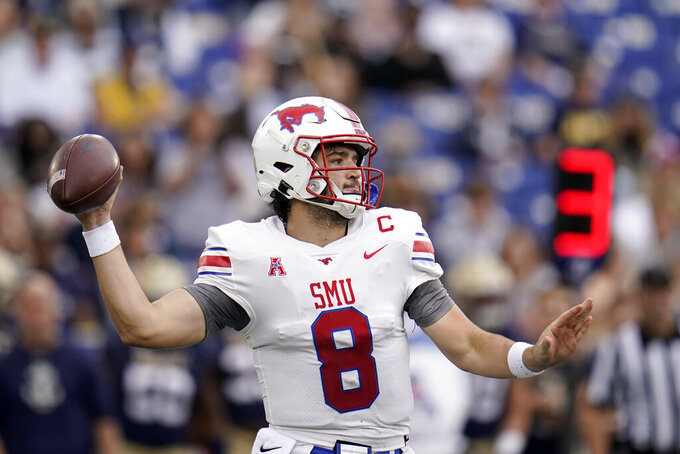 SMU is undefeated halfway through its regular-season schedule for the third year in a row. The Mustangs have won six in a row against Tulane, though last year's overtime win was the fourth game in that span decided by four points or less. The Green Wave have lost their last four games by an average of 22 points.

SMU's offensive line against Tulane's defensive front. The Mustangs, who returned all five starting linemen from last season, have allowed only one sack. Tulane is second in the American Athletic Conference with 2.5 sacks per game, and three of their defensive linemen have multiple sacks. The Green Wave's 15 overall sacks have resulted in 115 lost yards.

SMU: Quarterback Tanner Mordecai, the transfer from Oklahoma, is tied for the national lead with 26 passing TDs. He has completed 71% of his passes (157 of 221) for 315 yards per game.

The Mustangs are 23-6 since the start of 2019, and 12-1 at home during that span. ... Tulane second-year freshman quarterback Michael Pratt has thrown a touchdown in all 16 college games he has played since making his debut in 2020. ... SMU has two 30-catch receivers in Danny Gray and Rashee Rice. ... Tulane kicker Merek Glover has 316 career points, only 18 from passing Seth Marler to become the school’s career scoring leader. ... The Green Wave are playing their second consecutive Thursday night game, two weeks after a 40-22 home loss to Houston.