No. 21 Texas moving on after loss, now faces tough UTSA 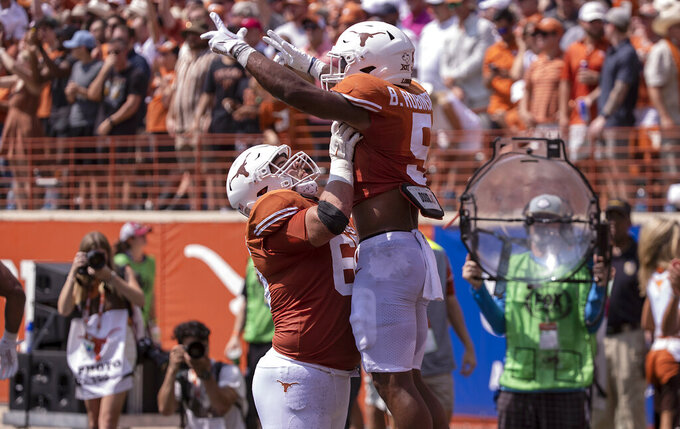 Texas running back Bijan Robinson (5) is picked up by Texas offensive lineman Jake Majors (65) after scoring a touchdown against Alabama during the first half of an NCAA college football game, Saturday, Sept. 10, 2022, in Austin, Texas. (AP Photo/Rodolfo Gonzalez)

Line: Texas by 11 1/2 according to Fanduel Sportsbook.

Texas earned national praise for a close loss to powerhouse Alabama. A solid win keeps momentum going for the program before the Longhorns head into the Big 12 schedule A loss blows it all up. UTSA made a statement with last season's 12 victories and Conference USA championship. A win at No. 21 Texas would be the biggest in program history. The Roadrunners didn’t start playing football until 2011.

UTSA's patchwork offensive line vs. Texas' defensive front. Injuries have forced the Roadrunners to play musical chairs at tackle and now they must protect quarterback Frank Harris against a big, physical Longhorns defensive line that played its best game in years against Alabama.

UTSA: Wide receivers Zakhari Franklin and Joshua Cephus are a dynamic combination for the Roadrunners. They both average more than 110 yards receiving through the first two games and give Harris multiple options on every play.

Texas: All eyes are on the whoever is at quarterback. Starter Quinn Ewers is likely out with clavicle injury. Backup Hudson Card is hobbled with a high ankle sprain. That could leave Texas with unheralded third-string Charles Wright and a steady dose of tailback back Roschon Johnson running the Wildcat formation.

UTSA coach Jeff Traylor was a former Longhorns assistant under Charlie Strong in 2015-16 as he moved into the college ranks for the first time after a highly successful Texas high school career ... Texas kicker Bert Auburn booted four field goals and Daniel Trejo averaged 46.4 yards on five punts against Alabama ... Texas standout running back Bijan Robinson averaged just 2.7 yards rushing against Alabama, but he has scored a touchdown in 13 of the last 14 games he's played