No. 21 UNC aims to end skid vs. Virginia in key ACC matchup 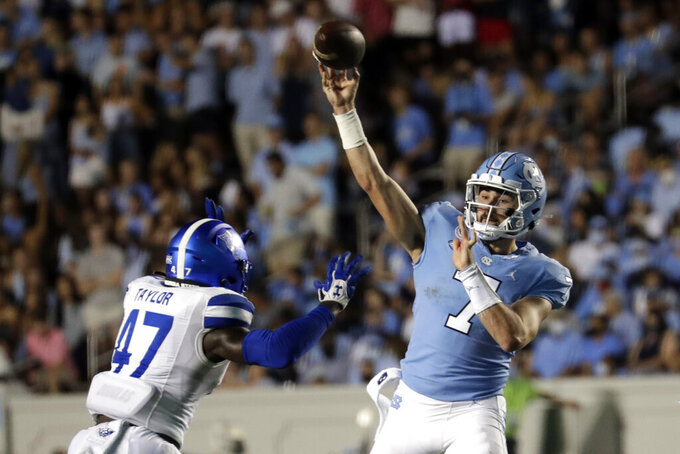 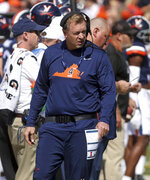 A shaky opening-night performance dealt a quick blow to North Carolina’s goal of winning its Atlantic Coast Conference division championship. The 21st-ranked Tar Heels know they can’t afford another early stumble with yet another loss to Virginia.

The Tar Heels and Cavaliers meet Saturday night with Virginia seeking a fifth straight victory in the long-running series between neighboring-state programs.

North Carolina (1-1, 0-1 ACC) opened the season as the Coastal Division favorite only to lose at No. 15 Virginia Tech in a game that saw star quarterback Sam Howell sacked six times and harassed into three interceptions. UNC regrouped with a lopsided win against Georgia State, but Mack Brown’s team is dealing with concerns with a veteran offensive line that hasn’t gotten off to a good start with communication and injuries.

“I told them it’s important to our program,” Brown said. “But at the same time, it’s about us. It’s not about who we play. We’ve got to play better.”

That include s last year’s 44-41 game with the Cavaliers rolling to a 21-point lead behind a big performance from quarterback Brennan Armstrong, then holding off a frantic UNC rally. Brown said his players know they’ve lost four straight meetings, noting: “They’re on social media, they read, so they know.”

As for Virginia coach Bronco Mendenhall, he wasn’t interested in dwelling on the Cavs’ run.

“It’s not even on my mind,” he said. “Looking back doesn’t help anyone.”

Some other things to know about Saturday’s Virginia-UNC game:

Virginia has lost 22 of 30 road games under its sixth-year coach, a frustration for Mendenhall considering he said winning half of the road games on the schedule should be enough to be in contention in the division. Conversely, the Cavaliers have won 19 of 22 home games.

They have won the past two meetings in Chapel Hill, with the November 2019 win standing as Virginia’s last road win against any opponent. They lost all four road games last year in a 5-5 season.

North Carolina sophomore Josh Downs has stepped into the lead-target role for Howell, grabbing 16 catches for 196 yards and two touchdowns in two games. He’d love to replicate the success of his predecessor against the Cavaliers, too.

Virginia started slowly against FCS William & Mary, getting stopped on two fourth-and-short plays, but rallied for a 43-0 victory. It was an emphasis, and a different story against Illinois, where the Cavaliers scored on their first two drive to lead 14-0 after less than five minutes.

The Cavaliers have used four quarterbacks, with Armstrong being the primary threat. But Keytaon Thompson, Ira Armstead and Jacob Rodriguez have also been behind center as the Cavaliers try to confuse defenses with a variety of packages.

“For the past couple of years, man, Virginia’s always been like that,” UNC linebacker Kaimon Rucker said. “They’ve always been lining up in some funky formations. And just as a defense … we’ve got to lock in. They give us a lot of eye candy. They give a lot of formations.”

TURNOVER AT THE TOP

North Carolina is trying to meet preseason expectations in a division that has offered little of the expected.

The Coastal Division had seven different winners in seven seasons from 2013-19 before the league played a division-less format last year due to the COVID-19 pandemic.

Virginia ended that turnover-filled run in 2019 as a Coastal favorite who went on to finish atop the division, though the preseason pick had failed to win the division in six of seven years before then.