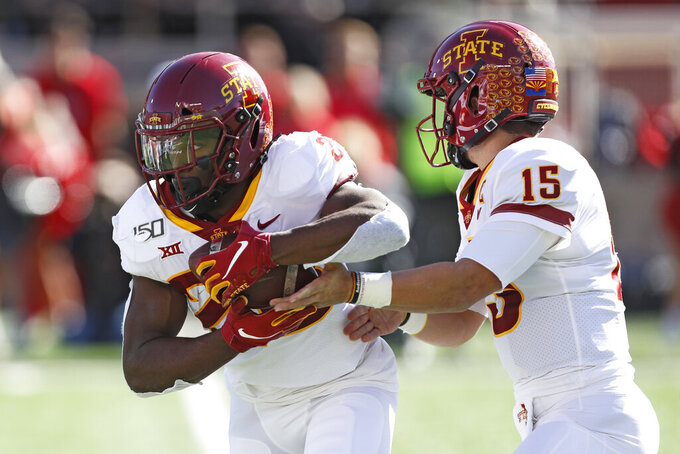 AMES, Iowa (AP) — Iowa State has been one of the hottest teams in the nation, beating three straight Big 12 opponents by double digits.

Another successful Saturday against Oklahoma State would send the 23rd-ranked Cyclones (5-2, 3-1 Big 12) into their bye week with a chance to make a run at the conference title looming on the other side of the break. A win over the Cowboys would move Iowa State to 4-1 in the conference ahead a game at league-leading Oklahoma and a home date with Texas looming in November.

The Cyclones are rolling behind Brock Purdy, who leads the Big 12 with 312 passing yards per game. The Cowboys (4-3, 1-3) know all about the sophomore quarterback after torched them for 318 yards and four TDs in a 48-42 win in Stillwater a year ago.

Oklahoma State's Chuba Hubbard leads the nation in including rushing yards (1,265), rushing touchdowns (15), rushing yards per game (180.7) and yards per carry (6.5), so slowing him down will be Iowa State's main focus. The Cyclones have been good at stopping the run this season, ranking 24th nationally with just 111 yards allowed and tied for 13th with five TDs let up on the ground.

"He's got all the qualities of what great running backs have the ability to do. He's been incredible for them," Iowa State coach Matt Campbell said of Hubbard. "He's a real talent."

After weeks of struggles at tailback, Iowa State appears to have found a keeper of its own in freshman Breece Hall. In last week's 34-24 win at Texas Tech, he rushed for 183 yards with TD runs of 75 and 30 yards. Hall finished with 256 all-purpose yards, the fourth-most in the FBS in 2019 and the most by an Iowa State player in 19 years. Oklahoma State has been leaky on defense too, allowing 432.3 yards a game.

Oklahoma State struggled to hang on to the ball in a 45-27 loss to Baylor last week. Freshman quarterback Spencer Sanders lost two fumbles — including one that Baylor brought back for a touchdown in the fourth quarter — and threw an interception. Sanders has thrown nine picks this season, and the Cowboys rank last in the Big 12 with 16 turnovers.

Oklahoma State is scoring 38 points a game and allowing 30, while Iowa State is scoring 37.1 points but allowing just 21.3. ... The Cyclones have outgained their opponents six times in seven games. Baylor had just six more yards than Iowa State in a 23-21 win in Waco last month. ... Cowboys WR Tylan Wallace is sixth nationally with 772 yards receiving, and he's doing it on 17.2 yards a catch. ... Iowa State has won a school-record five straight Big 12 games at home.

"This team, they've got talent everywhere, at the wide receiver position and obviously at the running back position and QB position. We just need to hone in and do our jobs." — Iowa State linebacker Mike Rose on the Cowboys.