No. 24 Pitt wraps up nonconference play against Rhode Island 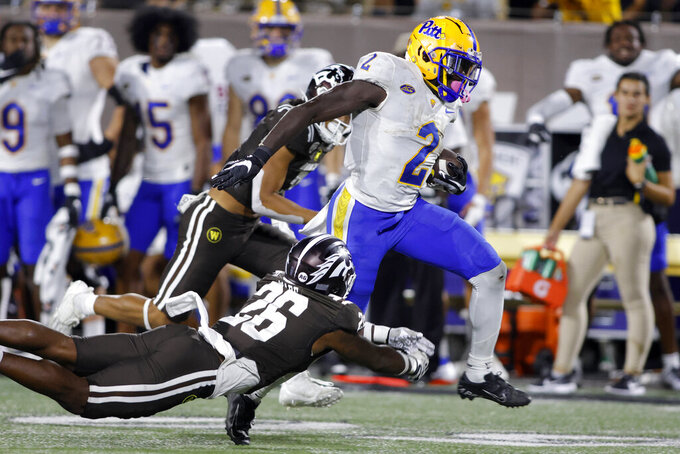 The Panthers get one final tune up before they begin defending their ACC title next week against Georgia Tech. Pitt avenged a loss to Western Michigan last fall by drilling the Broncos in Kalamazoo last weekend behind 133 yards rushing by Israel Abanikanda and a solid performance by redshirt freshman quarterback Nate Yarnell, who was pressed into duty after injuries to Kedon Slovis and Nick Patti. The Rams are one of the better teams in the FCS but face a tall task against a program that is unbeaten (14-0) against members of the Colonial Athletic Association.

Pitt vs. the injury bug. The Panthers have dealt with a variety of injuries — particularly along the offensive line and at quarterback — and while they've held their own thanks to improved depth, with their ACC opener looming next week expect the starters to be pulled quickly should Pitt jump to a quick lead.

Rhode Island: WR Kahtero Summers. The graduate transfer from St. Francis caught five passes for 78 yards and two scores in last week's loss to Delaware. Summers has a knack for finding the end zone. He has 12 touchdowns over his last 12 games played dating back to last season.

Pitt: RB Israel Abanikanda. The junior currently leads the ACC in rushing with 307 yards through three games, including a workmanlike 133 yards on 31 carries last week against Western Michigan when the Panthers opted to focus on the run with Yarnell pressed into starting duty.

Pitt coach Pat Narduzzi played at Rhode Island from 1987-90 and spent seven seasons as an assistant coach between 1993-99. ... Narduzzi would move into a tie with John Michelosen for third on the Pitt career victory list with a victory. Narduzzi is 55-38 since taking over the Panthers in December 2014. ... Pitt QB Kedon Slovis could return to play after serving as the backup to Yarnell last Saturday. Slovis sustained an undisclosed injury late in the first half of an overtime loss to Tennessee on Sept. 10. Yarnell played well in his first collegiate start, throwing for 179 yards and a touchdown without an interception. ... The Panthers could be without leading receiver Jared Wayne, who left the victory over Western Michigan after getting hit high while making a reception down the sideline. ... The Rams have done a relatively good job protecting QB Kasim Hill, allowing six sacks through three games. They will be tested against a Pitt defense that has collected the most sacks in the FBS since the start of 2019, including eight so far this season. ... Pitt is 19-1 all-time against FCS teams.