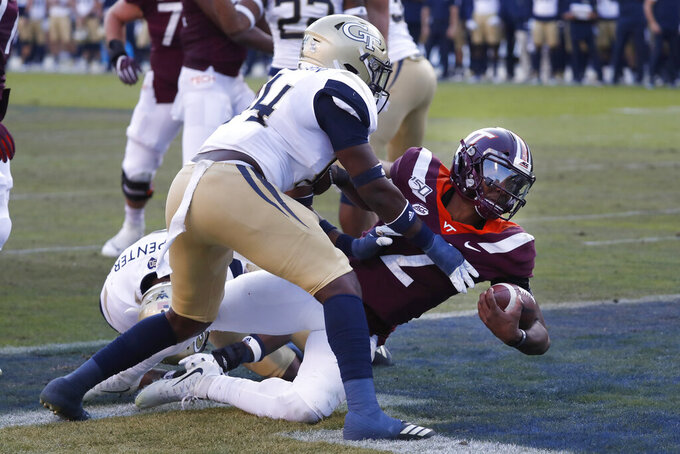 Pittsburgh and No. 25 Virginia Tech will meet in a pivotal ACC Coastal Division clash this weekend.

The Panthers (7-3, 4-2 Atlantic Coast Conference) and Hokies (7-3, 4-2) both head into Saturday’s game with a chance to capture the division, although the crown won’t be determined until after Virginia Tech’s game at Virginia on Nov. 29.

Pittsburgh and Virginia Teach are two of the hottest teams in the conference behind No. 3 Clemson. The Panthers have won six of its last seven games; the Hokies five of their last six.

Virginia Tech is 5-0 with Hendon Hooker at quarterback and has rushed for more than 200 yards in four of its last five games. Coach Justin Fuente likes those numbers, “but watching the film, I think they force people to throw the ball more than they want to because they are so good against the run.

“It’s going to be tight down the field, we know that going into the game, but they’ve certainly down a good job getting pressure on the quarterback.”

“Now we get to mid-November, late November and find we're going to have a battle on our hands down in Blacksburg,” Narduzzi said. “They're well-coached, they're tough, they're physical, they like to run the football, and again, they're playing with a lot of confidence right now.”

Some other things to watch when Pittsburgh visits the Hokies:

The Hokies were turnover prone before making the move to Hooker at quarterback. He’s mobile but has turned things around more by avoiding mistakes with eight touchdown passes and no interceptions in his five starts.

The Panthers will be without leading receiver Maurice Ffrench (broken jaw), providing sophomore Shocky Jacques-Louis and freshman Jared Wayne more opportunities. Jacques-Louis has caught a touchdown in each of his last two games, including a 74-yard catch-and-run against North Carolina. Wayne, who is 6-foot-3, caught four passes for 30 yards against the Tar Heels.

In closely matched games, turnovers and special teams plays can be huge momentum changers. The Hokies still tout their “Beamerball” mentality, but have also been victimized in recent seasons by special teams mistakes.

Virginia Tech is sixth in the ACC, giving up 1.9 sacks per game, while nearly half of the Panthers’ 45 sacks — 21 — have come on third down.

“We think we do some stuff in that package that a lot of people don't do, can't do,” Narduzzi said. “... And we've got some new twists for this week, as well, that maybe nobody has seen yet. So I think that's — there's a lot of stuff coming at you, and you've got to pick it up and it's not easy.”

The Hokies honored retiring defensive coordinator Bud Foster in their last home game to keep with their tradition of the final home game being Senior Day. But with very few seniors on the roster, and the defense coming off 45-0 victory at Georgia Tech, defensive players will surely be charged up for Foster’s last game — especially since Pittsburgh has the more heralded unit.