No. 25 Iowa St has milestones in reach, but K-State up first 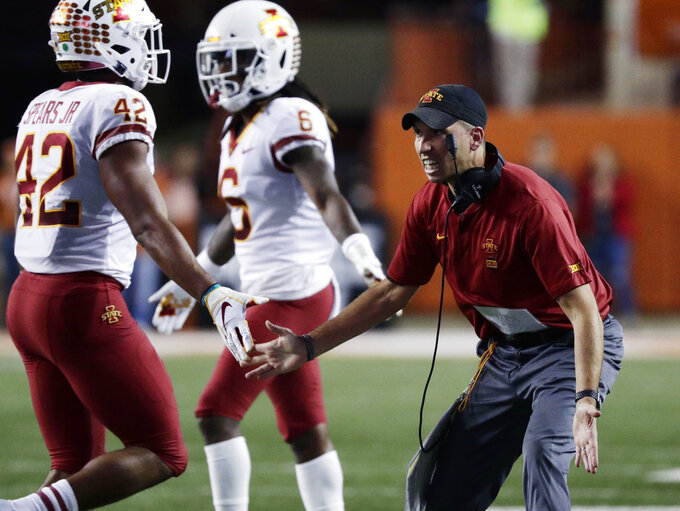 Iowa State head coach Matt Campbell, right, receives his players to the sideline during the first half of an NCAA college football game against Texas , Saturday, Nov. 17, 2018, in Austin, Texas. (AP Photo/Eric Gay)

AMES, Iowa (AP) — Its winning streak snapped and no longer in contention for a championship, No. 25 Iowa State now has to focus on something else.

That should not be a problem for coach Matt Campbell and his players because they still can go where few Iowa State teams have gone before.

The Cyclones saw their hopes of playing in the Big 12 championship game buried under the swarm of an aggressive Texas defense in Austin last week. The offense never found any footing and Texas gashed what was then the league's top defense for 405 yards in a 24-10 victory that snapped Iowa State's five-game winning streak, its longest in 16 years.

But check out what remains for the Cyclones (6-4, 5-3 Big 12) as they eye their final two regular-season games and a second straight bowl appearance:

— No Iowa State team ever has won six conference games. This one would do that with a victory in Saturday night's home game with Kansas State (5-6, 3-5), which needs a win for bowl eligibility.

— Only one Iowa State team in modern times has won nine games. The Cyclones would do that if they tack on a bowl victory and finish with three straight wins.

Iowa State is paying attention to this week's opponent for now: It has lost 10 straight games to Kansas State, the only Big 12 team the Cyclones' seniors have not defeated in their careers.

"We have everything to play for with our team," backup quarterback Kyle Kempt said Tuesday. "We have a chance to beat a team we haven't beaten in 10 years, a chance to send this team out the right way."

While frustrating, the Texas loss appears to have been filed away and forgotten. If anything lingers from that night, it's injuries. Freshman quarterback Brock Purdy and defensive back D'Andre Payne both were dinged up in the game. Purdy is back at practice, but Payne, a key figure in the secondary, is questionable.

It's also a test for Purdy, who was the catalyst in the winning streak with his passing and ability to keep defenses off balance with his running. It was the first time the Cyclones had lost since he became the starter and was by far his worst game. He finished just 10 of 23 for 130 yards, did not throw a touchdown pass and was sacked five times.

"It's tough, so now it's like, hey, that's life," Campbell said. "You've got to be able to overcome, not even within a game, but after a game like that and have the ability to come back. I've been really proud of how he has responded mentally and physically coming back. Pretty special guy."

Iowa State announced Tuesday that its opponent Dec. 1 would be Drake and not Incarnate Word, which said it had opted out to focus on the FCS playoffs that begin Saturday.

The game replaces Iowa State's opener with South Dakota State that was canceled after a few plays because of lightning on Sept. 1, the same storm system that canceled Drake's opener in nearby Des Moines. Drake (7-3) and Iowa State have not met since 1985.

"Coach (Matt) Campbell wants to play a 12th game and I believe our fans would welcome another chance to see this bowl-bound team play," Iowa State athletic director Jamie Pollard said. "I know the Bulldogs will enjoy the chance to play at Jack Trice Stadium and compete against a Power Five opponent."

"Since the cancellation of our season opener, we felt that our team deserved an additional opportunity to play and are thrilled to have that chance," he said. "To do so versus an opponent such as Iowa State, with whom our football history dates back to 1898, is an opportunity for which we are grateful."