No. 25 K-State at Oklahoma State in undefeated Big 12 opener 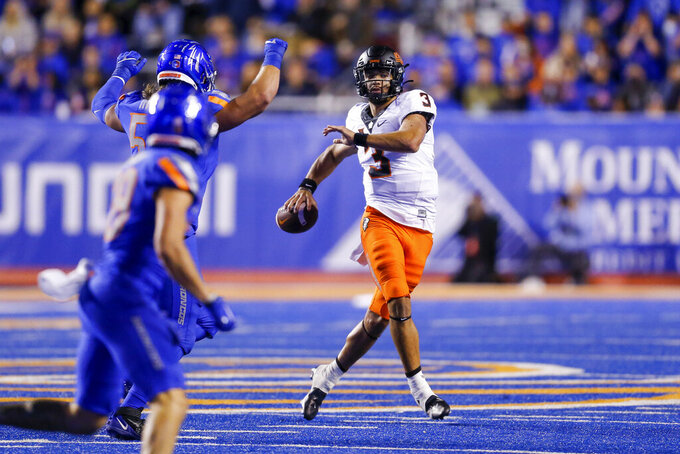 Some things to watch in Week 4 of the Big 12 Conference:

No. 25 Kansas State at Oklahoma State in a Big 12 opener matching 3-0 teams. Even after losing veteran quarterback Skylar Thompson again to an early season injury, the Wildcats have the opportunity to start 4-0 for the first time since they won their first 10 games in 2012. Will Howard, the starter in seven games as a freshman last year after Thompson was hurt, accounted for three TDs in a win at Nevada last week that got them back in the AP poll. Deuce Vaughn has five consecutive 100-yard rushing games, the longest K-State streak since 2003. Quarterback Spencer Sanders and the Cowboys are still adjusting to the offseason departures of top receiver Tylan Wallace and hard-running Chuba Hubbard, but grinded out a 21-20 win last week at Boise State for their fifth win in a row. Oklahoma State has a 41-26 series lead over K-State, but the teams have evenly split their 18 games since Big 12 play started in 1996.

Iowa State has held four consecutive opponents under 100 yards rushing for the first time since 1944, while Baylor has run for more than 321 yards per game. The Bears have 964 yards rushing and 11 TDs in three games, already surpassing last year's nine-game season totals of 813 yards and eight TDs. Abram Smith is the first Baylor player since 2015 with three consecutive 100-yard games. Trestan Ebner and Taye McWilliams also have 100-yard games. The Cyclones have allowed only two running plays of more than 10 yards this season.

Breece Hall has rushed for a TD in 15 consecutive games to match a Big 12 record. His 37 career rushing TDs are one short of Iowa State's school record. ... Texas has scored on 11 of the 13 drives with junior QB Casey Thompson in the game, with 10 of those resulting in touchdowns. ... TCU and SMU meet for the 100th time in a Dallas-Fort Worth rivalry that dates to 1915. The Horned Frogs have a 51-41-7 series lead after winning 17 of the last 20 meetings, though SMU won the last time they played in 2019. ... Kansas (1-2) has fewer turnovers (one) than losses this season. The Jayhawks lost a fumble in the fourth quarter of their last game.

West Virginia still doesn't have a Big 12 win over Oklahoma, the only league team the Mountaineers haven't beaten since joining in 2012. According to FanDuel Sportsbook, they are 17-point underdogs on the road against the six-time defending Big 12 champs in a conference opener Saturday night. Oklahoma is 8-0 in the Big 12 era after a 52-14 win two years ago. COVID-19 issues twice prevented them from playing last season.

Texas Tech QB Tyler Shough, the transfer from Pac-12 champion Oregon, threw for a career-high 399 yards with four touchdowns in the Red Raiders' win over Florida International. He completed 26 of 35 passes to 11 different players.