No. 25 Tulane aims to validate ranking vs. hard-luck Memphis 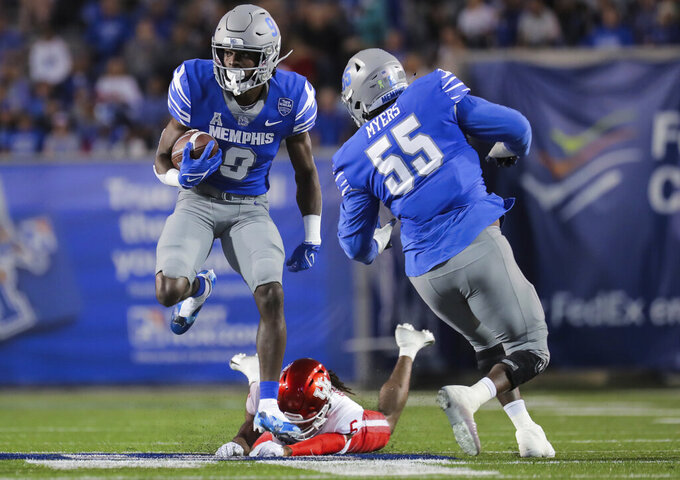 Line: Tulane by 7 1/2, according to FanDuel Sportsbook.

Tulane is trying to validate its first AP Top 25 ranking in 24 years while also remaining atop the American Athletic Conference standings. Memphis needs to win to get back into contention in the conference and to close in on what would be bowl eligibility for a ninth straight season.

Memphis TE Caden Prieskorn against Tulane LBs Nick Anderson and Dorian Williams. Prieskorn has been the Tigers' most productive receiver with 27 catches for 323 yards and six touchdowns. Anderson and Williams are captains and two of Tulane's best players, excelling against the run and capable in pass coverage.

Memphis: QB Seth Henigan has completed 65.1% of his passes for 1,924 yards with 12 touchdowns against three interceptions.

Tulane: Versatile and speedy RB Tyjae Spears has 658 yards and nine TDs from scrimmage. He ran for a 75-yard touchdown in a victory at South Florida last weekend.

Memphis has lost its previous two games against Houston and East Carolina by a combined total of three points, including a two-point overtime loss to the Pirates. ... The home team has won the past five meetings. ... Memphis has not won in New Orleans since 2016. ... Tulane has won 11 of 21 meetings in New Orleans and there has been one tie. ... Tulane's lone loss this season was at home against Southern Mississippi. ... Both teams are averaging 420 yards of offense and 33 or more points per game. ... The last time Tulane played as a ranked team was when its undefeated 1998 squad beat BYU in the Liberty Bowl to earn a final ranking of No. 7. The coach of that team was Tommy Bowden and the QB was Shaun King. ... After going 2-10 last season, Tulane was picked seventh in the AAC in the preseason media poll.