No. 25 Tulsa looks to continue momentum against Tulane 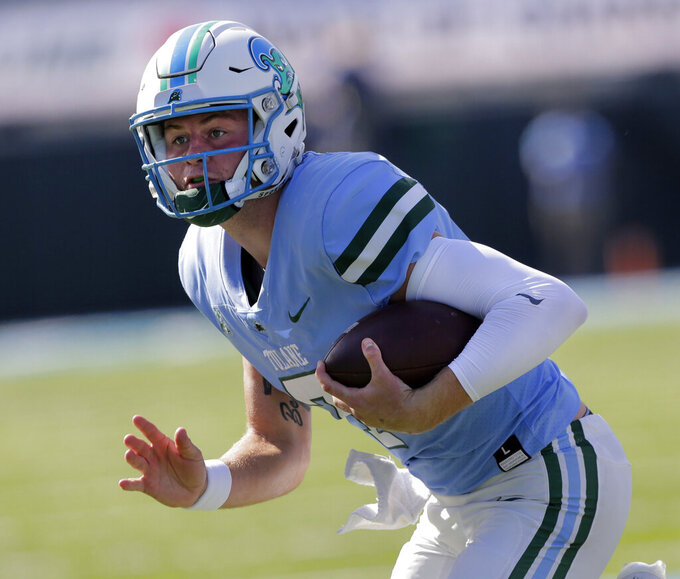 Tulsa is having its best season in years and wants to build on last Saturday’s win over then-No. 19 SMU. The Golden Hurricane have a clear path to the American Athletic Conference title game, but losing against Tulane would deal a severe blow to those hopes, especially with unbeaten Cincinnati still on the schedule. Tulane is on a three-game win streak and looks to become bowl eligible.

Tulane QB Michael Pratt vs. Tulsa LB Zaven Collins. Pratt, a freshman, has 14 touchdown passes and five rushing scores. Collins is one of the nation’s best linebackers. He has been named AAC Defensive Player of the Week three times in five games. Collins, at 6-foot-4 and 260 pounds, creates problems as a pass rusher and in coverage.

Tulane: DE Patrick Johnson. He leads the nation with 10 sacks. He had one against Army to bring his school-record career total up to 24½. He leads a unit that has allowed 307 yards and 12 points per game during the Green Wave's three-game win streak.

Tulsa: QB Zach Smith. He has been a second-half maestro this season. Tulsa has three comeback wins from double-digit deficits this season. In the second halves of those games, he has completed 62.5% of his throws for 550 yards with six touchdowns and just one interception.

Tulane has won the past three games in the series. ... Tulsa’s win over SMU last week was its second over a ranked opponent this season. It’s the first time the Golden Hurricane have won more than one game against ranked teams in a season. ... Tulsa has had four games postponed this season because of COVID-19. ... Tulane has scored at least 30 points in seven straight games.