No. 3 Georgia gets another tuneup vs Arkansas State 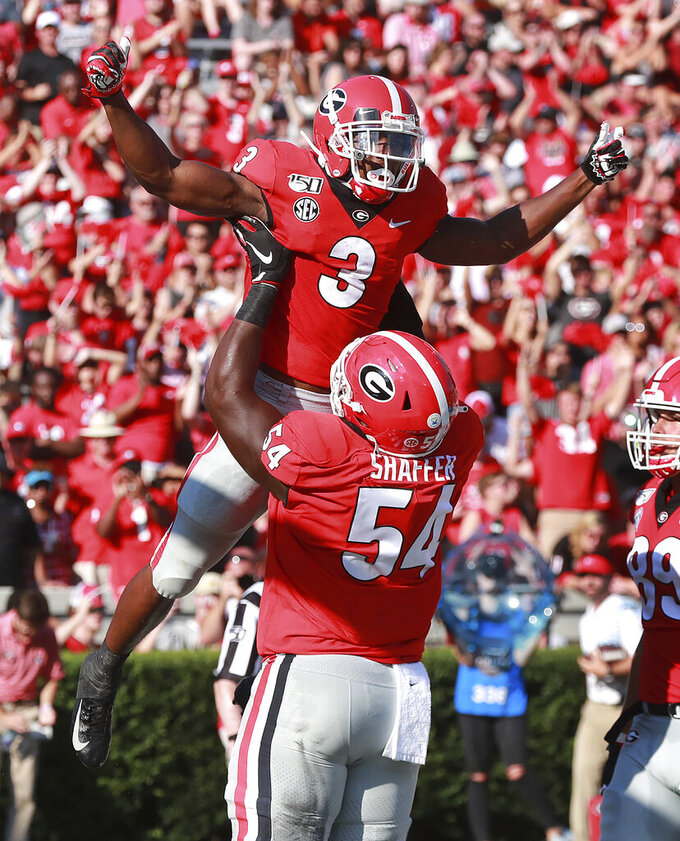 This is Georgia's final tuneup before the real season begins next week with No. 7 Notre Dame visiting Athens for the first time. The Bulldogs got to play a lot of younger players in a 63-17 blowout of Murray State, including quarterback Stetson Bennett, receiver George Pickens and running back Kenny McIntosh. This game will likely provide another opportunity to clear the bench — which could have major benefits later in the season.

Georgia's offensive line vs. Arkansas State's defensive front. The Red Wolves have sacked the quarterback seven times in their first two games, led by end William Bradley-King (2.5) and 338-pound Forrest Merrill (2.0). The Bulldogs have plenty of talent and experience up front, though it appears right tackle Isaiah Thomas could be out for the second straight week with a sprained ankle. Thomas had a streak of 15 straight starts before he was injured in practice before the Murray State game.

Arkansas State: WR Omar Bayless has more than 100 yards receiving in each of the first two games. He will be looking for openings in a Georgia secondary that was burned for a 60-yard touchdown last week.

Georgia: RB Zamir White. The redshirt freshman nicknamed "Zeus" has already turned plenty of heads in his first two college games. Showing no signs of the knee injury that kept him out all of last season, White has rushed for 124 yards while averaging 9.5 yards per carry.

Georgia defeated the Red Wolves 38-7 in 1997 and 45-17 in 2001. The latter was the first game of Mark Richt's 15-year tenure as the Bulldogs' coach. ... Arkansas State has lost 20 straight games against current members of the Power Five, including eight straight to SEC teams by a cumulative margin of 335-114. ... Georgia has scored on its opening possession in both games this season. ... The Red Wolves are coming off a 43-17 win at UNLV, their largest margin of victory against a non-conference FBS opponent since 2011.