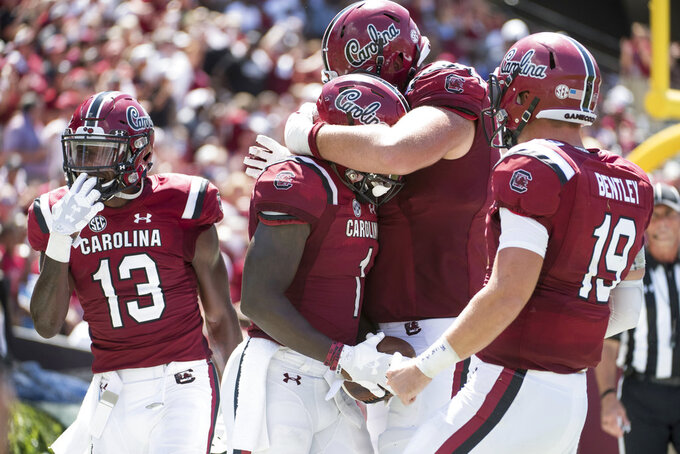 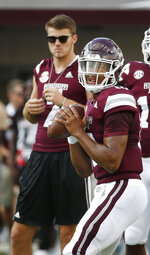 Here are some things to watch during the second week of the Southeastern Conference football season:
GAME OF THE WEEK: No. 3 Georgia at No. 24 South Carolina. It's an early-season matchup between two teams who are among the favorites to win the SEC's Eastern Division. Georgia has dominated the series over the past few seasons, winning the past three games by at least 14 points. The Bulldogs have hovered around a 10-point favorite for Saturday's game, but the Gamecocks will enjoy home field advantage at Williams-Brice Stadium.
MATCHUP OF THE WEEK: Texas A&M running back Trayveon Williams vs. Clemson defensive line. Williams ran for 240 yards and three touchdowns in a season-opening blowout of Northwestern State. He will face a much tougher challenge Saturday against a Clemson defensive line that features three Associated Press preseason All-America selections. Christian Wilkins and Clelin Ferrell were first-team selections, while Dexter Lawrence made the second team.
NUMBERS GAME: No. 25 Florida's 31 consecutive wins over Kentucky represent the fourth-longest streak in an uninterrupted series in NCAA history. Notre Dame won 43 straight over Navy from 1964-2006, Nebraska beat Kansas 36 straight times from 1969-2004 and Oklahoma had 32 straight wins over Kansas State from 1937-68. ... The SEC has seven teams in this week's Top 25 , its highest total since Oct. 16, 2016. The SEC's ranked teams are No. 1 Alabama, No. 3 Georgia, No. 7 Auburn, No. 11 LSU, No. 18 Mississippi State, No. 24 South Carolina and No. 25 Florida. ... The SEC went 13-1 in the opening week of the season. The only SEC team to lose was Tennessee, which fell 40-14 to No. 14 West Virginia. ... Mississippi junior-college transfer Scottie Phillips' 204-yard rushing outburst against Texas Tech was the highest total ever for any Ole Miss running back making his debut performance. It marked the 10th time an Ole Miss running back has gained over 200 yards in a game.
UPSET WATCH: No. 18 Mississippi State at Kansas State. The Bulldogs are up to a 9½-point favorite over Kansas State, which makes some sense considering Mississippi State's 63-6 win over Stephen F. Austin and Kansas State's way-too-close 27-24 vctory over South Dakota. Still, that's a big spread in a Power Five game and Mississippi State quarterback Nick Fitzgerald will be playing his first game of the season after missing the opener because of a suspension.
PLAYER TO WATCH: Kentucky RB Benny Snell Jr: Kentucky's hopes of ending its 31-game losing streak in its annual series with Florida likely depend on a big performance from its best player. Snell ran for 125 yards and two touchdowns in a season-opening 35-20 victory over Central Michigan after rushing for over 1,000 yards each of his first two years at Kentucky. Florida limited Snell to 59 yards on 14 carries last season.
___
AP Sports Writers Steve Megargee in Knoxville, Tennessee, and David Brandt in Jackson, Mississippi, contributed to this story.
___
More AP college football: https://apnews.com/tag/collegefootball and https://twitter.com/AP_Top25

By The Associated Press 5 hrs ago
By Ralph D. Russo 7 hrs ago
8 hrs ago
By Dave Skretta 8 hrs ago
By Caroline Pineda 9 hrs ago