No. 3 Georgia's opener could reveal plan for freshman Fields 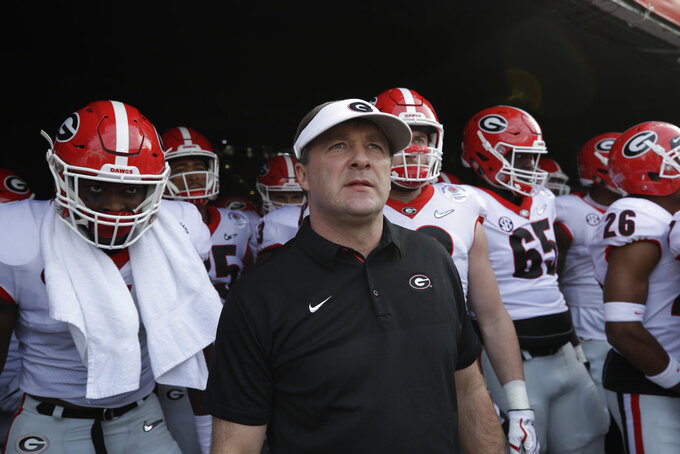 FILE - In this Jan. 1, 2018, file photo, Georgia head coach Kirby Smart waits with his team to run onto the field before the Rose Bowl NCAA college football game against Oklahoma in Pasadena, Calif. After falling to Alabama in last season's national championship game, No. 3 Georgia opens a fresh start with hopes for another title run when the Bulldogs face Austin Peay on Saturday.(AP Photo/Jae C. Hong, File) 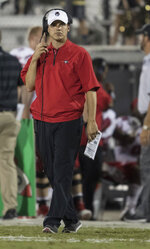 ATHENS, Ga. (AP) — Georgia's opening game against Austin Peay could reveal much about coach Kirby Smart's plan for freshman quarterback Justin Fields.
Smart hasn't confirmed Jake Fromm will retain his starting job for the No. 3 Bulldogs on Saturday, though that seems likely. Smart has said Fromm has been with the first-team offense throughout preseason practice, and even Fromm acknowledged this week he expects to be on the field for the first snap.
Still, there is great anticipation for Fields' debut. Fields, a top recruit, brings dual-threat skills to the position. After making a strong first impression while starting opposite Fromm in Georgia's intrasquad spring game , Fields may be slated for a special package.
Fields' talents could give opposing defenses more reasons to worry. Still, Smart must be careful not to disrupt momentum after Georgia won its first Southeastern Conference championship since 2005 last season and advanced to the national championship game. Fields (6-3, 225) pushed Fromm during the spring and preseason.
"He's obviously a great competitor and he makes a lot of great plays and a lot of good throws, too, so it kind of puts you on edge and you always want to one-up him and make a better throw," Fromm said.
Georgia leaned heavily on tailbacks Sony Michel and Nick Chubb last season, but both now are in the NFL. Smart said the transition at tailback could put more pressure on Fromm and Fields.
"They've both got to get better because for us to go where we want to go we may have to put more burden on those two guys," Smart said.
Austin Peay finished 8-4 overall and 7-1 in the Ohio Valley Conference last season. The Governors are No. 22 in the STATS FCS Top 25, but coach Will Healy said his team knows Georgia will be a different test. Healy referenced Georgia's six players lost in this year's NFL draft when he said the Bulldogs, who had the nation's top-ranked recruiting class this year, replaced "five stars with five stars."
"It's a pretty big deal for our program and our university and our kids are really excited to see if they can go toe to toe with the best athletes in the country," Healy said this week.
2-GAME SUSPENSION
The Governors will be without tailback Kentel Williams, who will serve the first of a two-game suspension for violations of team rules.
"We were trying to do something to get his attention," Healey said. "... I think he got a little bit complacent and made some decisions that didn't mirror what we want in our program."
Sophomore Ahmaad Tanner is expected to start. Tanner rushed for 698 yards and eight touchdowns as a freshman.
NEW SPARK
Another new name to watch in Georgia's offense is wide receiver Demetris Robertson, a transfer from California. The former five-star recruit from Savannah, Georgia, caught 50 passes for 767 yards and seven touchdowns as freshman at Cal. He played only two games last season and was granted a waiver from the NCAA for his immediate eligibility.
RENOVATION
Georgia has scrambled to complete a $63 million renovation to its west end zone. The project includes a lounge to host recruits, a new locker room for the Bulldogs, a new scoreboard and new seating behind the end zone. Georgia players traditionally ran onto the field from the east end zone, where the old locker room was located.
OPTION ATTACK
Austin Peay's triple-option offense will be a different opening test for the Bulldogs. Quarterback Jeremiah Oatsvall only started five games but passed for 1,148 yards and ran for 453 yards with six touchdowns in 2017.
"I'm not saying they're going to come in and dominate and be able to run the ball every down on us, but I think what they can do is get explosive plays, because they affect you on the perimeter," Smart said. "If you don't play the option right, which is not something that we practice against every day, it can become a problem for you."
TAILBACK COMMITTEE
D'Andre Swift is expected to lead Georgia's committee of tailbacks including Elijah Holyfield, Brian Herrien and freshman James Cook, the younger brother of Minnesota Vikings running back Dalvin Cook. James Cook's speed could earn him immediate playing time. Georgia lost another top freshman tailback, Zamir White, to a season-ending knee injury in practice.
___
More AP college football: https://apnews.com/tag/Collegefootball and https://twitter.com/AP_Top25