No. 4 Clemson, Lawrence look to resume winning at FSU 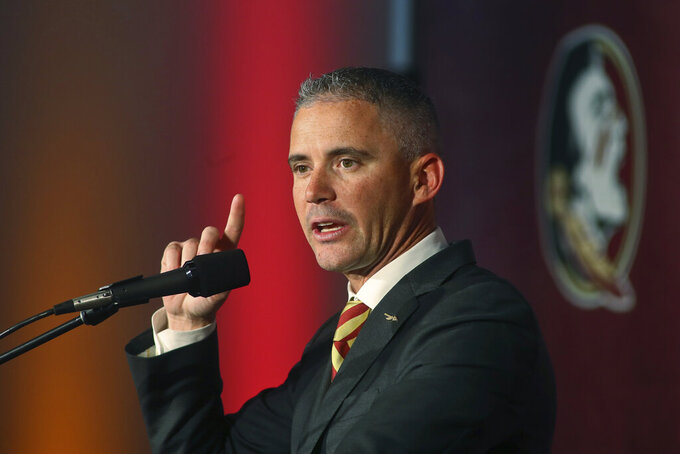 Clemson’s chase of a sixth straight ACC title and sixth spot in the College Football Playoff. The Tigers lost at No. 2 Notre Dame last time out and another defeat would surely end that run. Florida State is seeking a signature win for the first-year program of Mike Norvell.

Clemson tailback Travis Etienne against Florida State’s defensive front. Etienne, the two-time defending ACC player of the year, has slowed his production the past two games, managing just 112 rushing yards combined. He could find his footing against the Seminoles, which is 11th in the ACC in most yards given up on the ground.

Clemson: QB Trevor Lawrence has spent three weeks off the field, missing two straight games due to a COVID-19 positive and recovering his stamina and touch during the Tigers bye week. Lawrence is eager to get back to the game in what’s expected to be his final season in college.

Florida State: CB Asante Samuel Jr. leads the Seminoles with three interceptions and six pass breakups. He’ll be waiting for any wobbly or underthrown ball by Lawrence in this matchup of two players likely to be first-round NFL draft picks next spring.

Florida State is the youngest team in the Football Bowl Subdivision with nearly three-quarters of their roster (73.6%) sophomores or freshman. ... Clemson lost 17 of its first 23 games against Florida State after the Seminoles joined the ACC. The Tigers have won five straight in the series since. ... Florida State blocked three kicks to tie a school record against Georgia Tech in September. Clemson had three kicks blocked in a win over Miami this past October. ... Clemson lost a regular-season game for just third time in the past six seasons. The two previous times, the Tigers went on to an ACC title and the College Football Playoff. ... Florida State has attempted 26 fourth downs this season, converting 14 of them. That’s one shy of the program best set in 2004. ... Clemson WR Amari Rodgers has caught at least six passes in six consecutive games. One more will set a program record.