No. 4 Clemson opens vs Ga Tech looking to improve on 10 wins 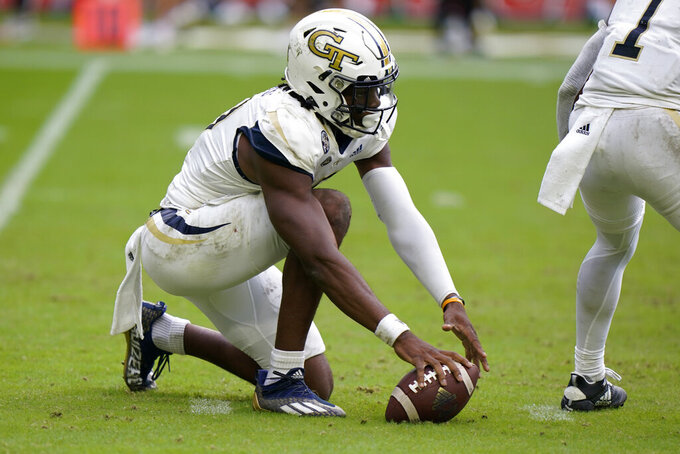 ATLANTA (AP) — At most schools, 10 wins is the indicator of a successful season.

Not so for Clemson, which considered it a major letdown.

The No. 4 Tigers are in comeback mode after settling for a 10-3 mark last season, which brought an end to a pair of impressive streaks.

Clemson had won six straight Atlantic Coast Conference titles and appeared in every College Football Playoff except the first in 2014, winning a pair of national championships.

Now, as the Tigers open the season Monday night against ACC rival Georgia Tech in Atlanta, they are eager to return to a more customary level.

“We’re going to get back to doing what we do. It’s that simple," defensive end K.J. Henry vowed. “A lot of times, especially for myself, we knew what we capable of, but we were in our own way. There are a lot of good teams that we play every year that fed off of that.”

Clemson's down season seemed even more pronounced because it plays in a league that doesn't carry the same reputation as the Southeastern Conference or Big Ten.

"We aren’t given the respect we deserve," Henry said. “Clemson finally has a hiccup year and it’s like everybody’s surprised that there’s a close game.”

One of those close games came against Georgia Tech. A late defensive stand preserved Clemson's 14-8 victory and its seventh straight win in the series. The year before, the Tigers romped past the Yellow Jackets 73-7 in Atlanta.

At Georgia Tech, the bar is set much lower than 10 wins.

Given Georgia Tech's brutal schedule, a .500 record might be out of reach. Clemson is one of three 10-win teams the Yellow Jackets must navigate in their first five games.

“Nothing's easy," Collins said. “You've got to fight through things. How we handle the hard things will say a lot about us.”

Clemson, of course, is on an entirely different level. Another 10-win season simply won't do.

“We’re excited to prove we belong," Henry said, "and not only we belong, but we’re one of the best in the country.”

DJ Uiagalelei is slimmed down and ready to fulfill the potential he showed in his first crack as Clemson's No. 1 quarterback.

Two years ago, Uiagalelei turned in a pair of stellar performances against Boston College and Notre Dame while filling in for Trevor Lawrence.

After claiming the job when Lawrence departed for the NFL, Uiagalelei was plagued by injuries and dogged by critics as he completed less than 56% of his passes, with nine touchdowns and 10 interceptions.

Georgia Tech is expecting a much better performance.

Collins is spending more time working with a defense that ranked near the bottom of the ACC in most categories.

In particular, he knows the Yellow Jackets must generate more sacks and turnovers.

Clemson coach Dabo Swinney opens a season with new offensive and defensive coordinators for the first time in his 14 full seasons.

After Brent Venables left to become the head coach at Oklahoma, analyst Wes Good was elevated to lead the defense along with co-coordinator Mickey Conn.

Quarterback coach Brandon Streeter takes over the play-calling on offense after Tony Elliott moved on to Virginia.

No player is more important to Georgia Tech's hopes for a turnaround season than quarterback Jeff Sims.

Collins acknowledged as much when he made a couple of key changes to his coaching staff, bringing in Chip Long as offensive coordinator and Chris Weinke as quarterback coach.

Those moves were made specifically to get more out of the third-year QB, who has a strong arm and plenty of mobility but has been unable to put it all together on a consistent basis.

“His ability to throw and run, that’s kind of what the game has come to now a days,” Henry said. "That’s what he brings to the game. Very fast, very elusive, the second you think you’ve got him, you probably don’t.”

For example, Justin Mascoll is going by “Dr. Strange.”

“It’s because strange things happen when I’m out there,” Mascoll said with a smile.

He pointed to his batted pass in the Cheez-it Bowl win over Iowa State, which Tigers defensive back Mario Goodrich took back for a pick six.