No. 4 Clemson visits another ACC foe in Florida State 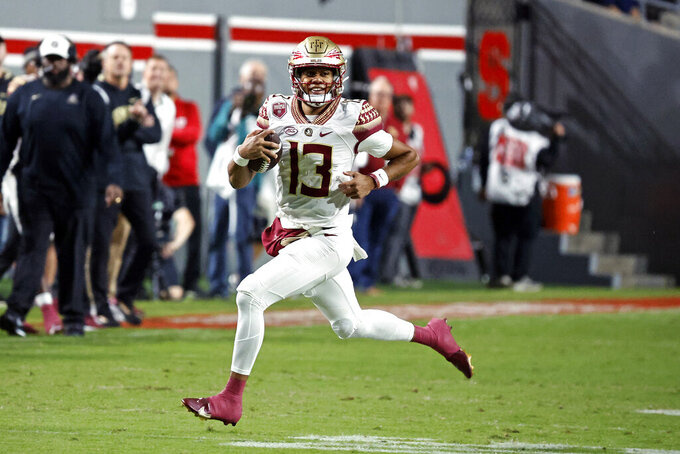 “I wanted to vomit watching the Florida State game last year,” Clemson coach Dabo Swinney said. “We won. But we were so bad.”

Clemson may have been bad but Florida State wasn't good enough. Both teams appear to be improved this time around as No. 4 Clemson (6-0, 4-0 ACC) travels to Florida State (4-2, 2-2) on Saturday with plenty on the line.

The Tigers have already knocked off a pair of Top 25 divisional foes in Wake Forest and NC State, so a win over Florida State would dispatch yet another contender and give the Tigers a 10th 7-0 start in school history as well as the sixth under Swinney since 2015.

For the Seminoles, there are no longer any moral victories as they seek to get back on track after consecutive losses to the Demon Deacons and Wolfpack.

“It’s a team that’s a few plays from being undefeated,” Swinney said of the Seminoles. “It really is.”

The Tigers haven’t been as efficient as Swinney would like, but they have scored at least 30 points in all six games in 2022 for just the third time in school history. While Clemson averages 39 points per game, the Tigers are incredibly efficient in the red zone with scores on all 32 drives inside the 20-yard line. Tthey have touchdowns on 24 of those drives.

Clemson will be the toughest matchup yet for a Florida State pass defense that is allowing just 170.3 yards per game, tops in the ACC and 14th in the FBS.

This will be Clemson’s first trip to Florida State since 2018. The Tigers were supposed to play there two years ago, but the game was called off when Clemson had a player test positive for COVID-19 and it was an angry Swinney who charged that struggling Florida State used that development to get out of facing the undefeated Tigers.

Swinney is eager for his players to experience the atmosphere of a full, noisy stadium at night between the ACC rivals. Clemson defensive end Xavier Thomas remembers the atmosphere and relishes the chance for another opportunity to win at Florida State.

“Can’t wait for us to get down there,” he said.

Clemson center Will Putnam said his team's undefeated start has happened without all phases of the team clicking at the same time. Putnam has seen the offense shine in wins like a 51-45 overtime shootout at Wake Forest last month or the defense stand out as in the Tigers’ 31-3 win at Boston College a week ago.

Florida State had 33 sacks a year ago as Jermaine Johnson led the way with 11.5. With Johnson and Keir Thomas gone, the Seminoles have still generated an impactful pass rush with 16 sacks (20th in the FBS).

“This is what I've been working for, this is what I dreamed of,” said Verse, who transferred from Albany in the offseason.

Clemson’s defense is close to getting everyone healthy and back on the field.

Defensive end Xavier Thomas had two sacks and a quarterback hurry in just six snaps last week against Boston College while defensive tackle Bryan Bresee is expected to return this week after missing the past two games dealing with a kidney infection. Swinney said players injured in the secondary who missed the games like cornerback Sheridan Jones and safety Tyler Venables are also expected to return.

Florida State’s top defensive tackle, Fabien Lovett, missed a fourth straight game and his status for the Clemson game is uncertain. The Seminoles’ leading tailback, Treshaun Ward, had his arm in a sling late in the game at NC State a week ago. While Florida State has had some players return from injury, notably Verse and starting LT Robert Scott, injuries have limited both lines.