No. 5 Notre Dame basks in its unusual home 'crowd' 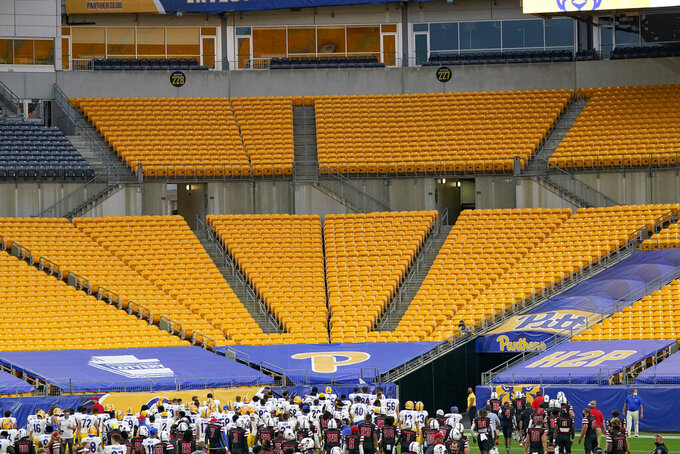 The Pittsburgh football team looks toward the empty bleachers after defeating Austin Peay in an NCAA college football game, Saturday, Sept. 12, 2020, in Pittsburgh. In a quirk this season, No. 5 Notre Dame enjoys a greater home-field advantage than most of its opponents: As of now, the Fighting Irish are slated to play in front of only one crowd bigger than their own, which is limited to about 10,000 people because of the pandemic. Pitt, Boston College, North Carolina and Wake Forest have not allowed any spectators to attend so far. (AP Photo/Keith Srakocic)

SOUTH BEND, Ind. (AP) — In a normal season, Kurt Hinish probably wouldn’t have been able to hear the students shouting his name from the ninth row of the bleachers at Notre Dame Stadium. But during Notre Dame’s 52-0 rout of South Florida, the senior defensive tackle could.

In the second quarter, Hinish shrugged at their yells and told his teammates he didn’t recognize the students. When their efforts continued into the fourth, Hinish finally turned around in his folding chair in the defensive line huddle, giving a nod and laughing at the celebration that ensued.

That was one difference between having 80,000 fans in a sold-out stadium and the 10,000 who were allowed in under COVID-19 regulations — and of course there would be differences. But in a quirk of this unusual season, Notre Dame (2-0, 1-0 ACC) will enjoy a greater home-field advantage than most opponents: The Fighting Irish are slated to play in front of only one crowd bigger than their own.

That will change by the time the fifth-ranked Irish play at least some of those teams, but perhaps not by much. The state of North Carolina is now allowing fans to attend games with capacity limited to 7%. That would mean only about 3,500 fans at UNC and about 2,200 at Wake Forest.

The Irish were originally scheduled to play Wake Forest on Sept. 26, a game that would have been played in an empty stadium. After several Irish players tested positive for COVID-19 on Sept. 21, that matchup was postponed to Dec. 12.

Although simply playing at home is considered an advantage, Notre Dame players have noted the importance of even the smaller number of fans. After the win against Duke, wide receiver Avery Davis expressed the sentiment that seemed to reflect the general consensus among players: It didn’t feel that different.

“Honestly, I was expecting a lot less,” Davis said. “I didn’t think there was going to be that many people in there, so to see them and to feel them and hear their energy, that was really exciting.”

The crowd, while only about 12.5% of stadium capacity, provided many of the hallmarks that players have come to expect. Students screamed on the opposing teams’ third downs and lifted each other up for touchdown pushups following Irish scores. Offensive line coach Jeff Quinn had to shout for his players to hear him over the sound of the marching band playing in the stands 25 yards away. A speaker behind the northern end zone amplified the band’s music so loudly it seemed to shake the ground nearby.

Quarterback Ian Book said he planned to pretend there were 80,000 people in attendance, but he didn’t have to use his imagination as much as he expected.

“When I got out there, I was pretty happy with the crowd that we had,” Book said. “It felt like more people than I thought it would be, so I loved it. The crowd was great.”

About that crowd noise: Some of it is artificial. The ACC has provided its teams with standardized options, including audio files from the NFL and EA Sports. In the first two games, Notre Dame played the EA Sports file through the speaker system at 65-70 decibels, according to Rob Kelly, senior associate athletics director of media and brand.

Kelly said that noise level — which is similar to a basic office environment and less than a vacuum cleaner — was “agreed upon by both teams” and is below the ACC-regulated upper limit of 85 decibels.

“The ambient crowd noise is intended to be that baseline noise of the sound of people talking in the stadium or generally the sound of having 70,000-plus people in a stadium at any given time,” Kelly said. “It was specifically continuous ambient sound, and not cheers or roars.”

Unlike sound from the band and video board, the artificial crowd noise doesn’t have to stop before the snap. Actual fans, of course, have no constraints.

Notre Dame takes a 20-game home win streak into Saturday’s game against Florida State (1-2, 0-2) and then — after yet another home game, against Louisville — will travel to Pitt. Six weeks after their season opener, the Irish will finally discover how much a home-field advantage during the pandemic really matters — by playing without it for the first time.