No. 6 Oklahoma 13-game W streak began with 4 OTs over Texas 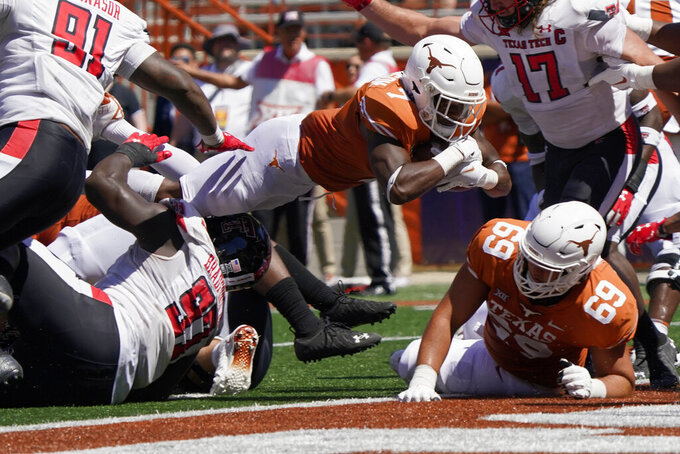 Texas running back Keilan Robinson (7) dives for a touchdown against Texas Tech during the second half of an NCAA college football game on Saturday, Sept. 25, 2021, in Austin, Texas. (AP Photo/Chuck Burton) 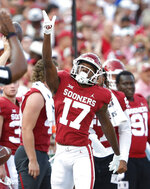 Oklahoma has a 13-game winning streak that began with its four-OT victory over Texas in last year's Red River rivalry game at the State Fair of Texas. Texas has scored 160 points in a three-game winning streak since a Week 2 loss at then-unranked Arkansas of the Southeastern Conference, the league the Sooners and Longhorns will both join no later than 2025. They are tied with idle No. 12 Oklahoma State (5-0, 2-0) for the Big 12 lead.

Big 12 rushing leader Bijan Robinson against Oklahoma defense that is seventh nationally allowing 79.4 yards rushing per game. The Sooners twice this season allowed an opposing team to run for exactly 100 yards. Robinson ran 35 times last week for a career-high 216 yards against TCU and ranks second nationally at 130.4 yards per game, about half of the Longhorns’ league-best 266 yards per game. The only opposing runner with more than 100 yards in Oklahoma's last 18 games was Iowa State's Breece Hall, in the last Sooners' loss.

Oklahoma: Sophomore WR Marvin Mims is fourth on the Sooners with 14 catches, but is second in the Big 12 with his 18.9 yards per catch. He is still looking for his first TD after leading the Sooners with 37 catches for 610 yards and nine TDs as a true freshman last season.

Texas: Senior LB DeMarvion Overshown is coming off his second 10-tackle game this season, including a career-high eight solo stops against TCU. He is the Longhorns' top tackler with 44. In last year's Red River game, he had a career-high 11 tackles and returned an interception 29 yards.

Oklahoma has 15 sacks and 25 tackles for loss in the last two meetings against Texas. ... Head coaches Lincoln Riley and Steve Sarkisian both have 50 career wins. ... Only top-ranked Alabama, with 19 wins in a row, has a longer active winning streak than the Sooners. ... The Longhorns are the only Big 12 program with a winning record against Oklahoma.