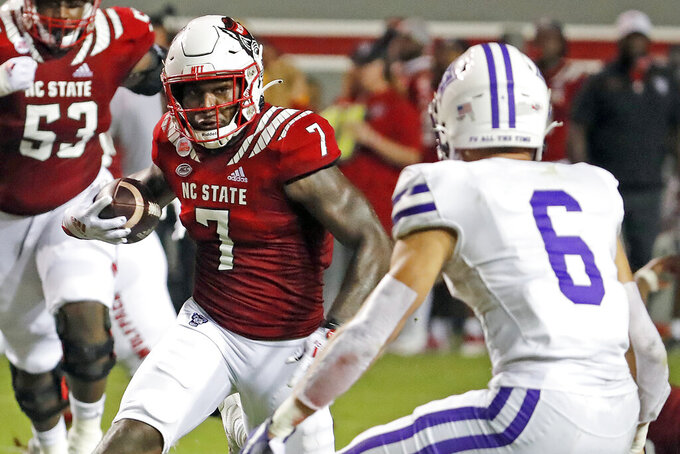 North Carolina State's Zonovan Knight (7) is challenged by Furman's Hugh Ryan (6) during the first half of an NCAA college football game in Raleigh, N.C., Saturday, Sept. 18, 2021. (AP Photo/Karl B DeBlaker)

Line: Clemson by 9 1/2, according to FanDuel Sportsbook.

The Tigers have looked shaky offensively as the six-time reigning ACC champions. Now they’re visiting the Wolfpack, picked in the preseason as Clemson’s top Atlantic Division challenger with a team full of returning veteran talent. A win would be the Wolfpack’s biggest under ninth-year coach Dave Doeren after losing 15 of 16 in the series.

Clemson’s stagnant offense against North Carolina State’s injury-hit defense. The Tigers have managed 17 points in two games against power-conference teams this year, including three points in a loss to No. 2 Georgia on opening night and 14 in a close win last weekend against Georgia Tech. The Tigers have also failed to crack 300 yards in two of three games. They’ll meet a Wolfpack defense that lost all-ACC linebacker Payton Wilson to a season-ending injury and safety Cyrus Fagan after a Week 2 loss at Mississippi State.

Clemson: QB D.J. Uiagalelei. The 6-foot-4, 250-pound sophomore threw for more than 900 yards and five touchdowns in two starts last year, but things haven’t come easily in his first year as the full-time starter. Uiagalelei has thrown for 475 yards and one touchdown in three games this season.

N.C. State: RB Zonovan Knight. Nicknamed “Bam,” the Wolfpack runner has run for 298 yards in three games, cracking the 100-yard mark in easy wins against South Florida and Furman. He managed just 31 yards in the loss to Mississippi State. But Knight is third in the Bowl Subdivision ranks by averaging 8.5 yards per carry and could be critical for the Wolfpack establishing physical move-the-chains play.