No. 9 Iowa rested, still in control of its Big Ten West fate 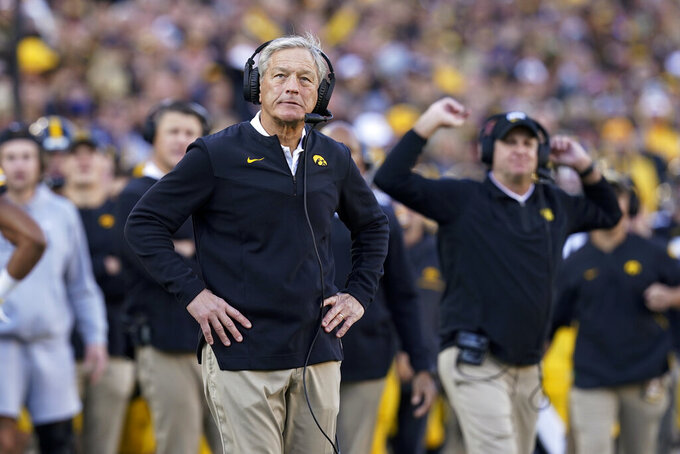 IOWA CITY, Iowa (AP) — Sam LaPorta didn't use the Iowa football team's open date to get away from it all.

“Which is kind of ironic,” LaPorta said Tuesday.

The No. 9 Hawkeyes were glad to get some time off last weekend after the 24-7 home loss to Purdue on Oct. 16. The defeat knocked the Hawkeyes, ranked No. 2 at the time, out of the top 10.

They're back in this week after teams ahead of them lost, and now they enter the final five weeks of the regular season still in control of their fate in the Big Ten West.

“The only thing we lost, as far as our goals, was the undefeated season,” senior offensive lineman Kyler Schott said. “Everything else is still there for us.”

If the Hawkeyes win their final five games, all within the division starting with Saturday’s visit to Wisconsin, they’ll win the West. Lose again, and the formula gets more complicated.

“We actually do have something in the bank right now, so that’s positive,” coach Kirk Ferentz said. “All that being said, all that matters now is what we do moving forward.”

The Hawkeyes still have some issues, especially on offense, that proved costly against Purdue.

Iowa had just 76 rushing yards on 30 carries against Purdue.

“The last game, we got away from our run game,” running back Tyler Goodson said. “But I understand why — we were down and we were hurrying up to get points.”

LaPorta said the success of the run game dictates how Iowa's offense is going to operate.

“If you can’t run the ball, you’re probably not going to be able to throw the ball,” LaPorta said. “Being one-dimensional is never a good thing for an offense. Running the ball is a huge thing for us. One-dimensional offenses don’t always work out great.”

Ferentz said he see some positives offensively, but he pointed to inconsistent play on an offensive line that starts a sophomore, a redshirt freshman and a true freshman along with junior center Tyler Linderbaum and Schott.

The Hawkeyes appreciated the time off, and it helped get some injured players healthy, although cornerback Riley Moss is still out with a knee injury.

“For me, it was a good time to have (the open date),” Schott said. “I mean, you don’t want to sit there and think about (the loss to Purdue) for a whole week. But at the same time, it gave us some extra time to work on what we need to do differently.”

Ferentz has talked all season about splitting the schedule into two blocks, the seven-game stretch to open the season and the five to end it.

“It was a good time to break that mentally,” Ferentz said. “Now it’s like running a five-lap race as opposed to seven. Five is a whole lot easier. This is like a 400 (meter race), I guess. Believe me, I never ran track in high school, but it’s basically run as hard as you can for the whole race. That’s where we’re at now, full speed ahead, and we’ll see where we’re at when it’s all over.”