No. 9 Michigan's Harbaugh wary of visit to improved Nebraska 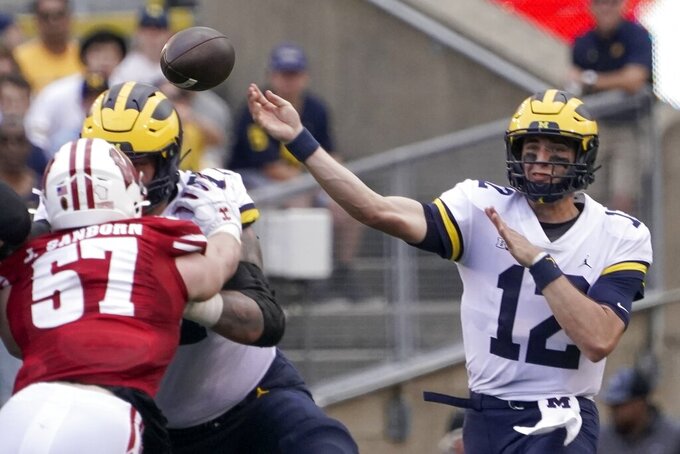 LINCOLN, Neb. (AP) — Jim Harbaugh and the Michigan Wolverines gave Scott Frost a harsh introduction to the Big Ten in 2018.

Frost was coaching his third game with the Cornhuskers and his team, down 39-0 at halftime, lost 56-10.

“I think it’s pretty clear we’re not ready to compete against a team like that,” Frost said minutes after taking his punishment at the Big House.

The ninth-ranked Wolverines come to Memorial Stadium on Saturday night, and Harbaugh and Frost both believe the Huskers are up to the task this time.

Michigan (5-0, 2-0 Big Ten) is off to its best start in five years, has not trailed in any of its games and is coming off a 38-17 win at Wisconsin. Nebraska (3-3, 1-2) appears vastly improved from its embarrassing season-opening loss at Illinois, having pushed Oklahoma and Michigan State to the limit and hammering Northwestern 56-7 last week.

“I think Nebraska is really impressive," Harbaugh said. "They’re playing their best football. It was a dominating performance (last week). You look back at their games that they played. They’ve all been close against outstanding opponents.

“It’s going to be a big challenge. No different really from what we were facing last week. We’re in the same situation, getting ready to play a really hungry team, a team that’s hitting their stride.”

Michigan started the season unranked and picked to finish middle of the pack in the Big Ten East. That the Wolverines have built their record against unranked opponents doesn't matter to them.

“We know what we are capable of," linebacker Josh Ross said.

Frost is 0-9 at Nebraska against ranked opponents, and a night game in Lincoln would be an ideal stage for a breakthrough against one of college football's iconic brands. The game also is an opportunity to chart the Huskers' growth since that abysmal afternoon in Ann Arbor in 2018.

“I remember us getting smacked," said Adrian Martinez, who was the starting quarterback that game and will be again Saturday. “It was a rough game for myself and a rough game for the team. I know I only played a half of football. Different teams. We are in a much different spot as a program and as a unit on both sides of the ball here.”

The Wolverines have had solid quarterback play with Cade McNamara, who has completed 60% of his passes with five touchdowns and no turnovers. Highly touted freshman J.J. McCarthy, though, has been too talented to keep on the bench.

McCarthy played against Wisconsin when the game was still in doubt. He ran for a score to help Michigan restore a 10-point lead in the third quarter and threw a 56-yard touchdown in the fourth.

Nebraska's offense has increasingly added triple-option plays, those old-school runs that challenge the defense to stay disciplined as they unfold with the quarterback handing off, keeping or pitching to a trailing running back or receiver.

Frost ran the option as Tom Osborne's quarterback in 1996-97. The option game has been effective, but it doesn't come naturally to current players.

“It’s something we’ve been actively practicing,” Martinez said. "It’s one of those concepts that you just need reps and reps. We do it every day at practice and we continue to work on it. You see some of that chemistry paying off.”

The Wolverines have thrown just one interception, by third-string QB Alan Bowman on the last possession against Wisconsin, and have not lost any of their five fumbles. They've given up just one sack and are on pace to have their fewest penalty yards since 2014.

Nebraska holds a 136-17 scoring advantage over its three home games. Fordham and Northwestern each scored seven points and Buffalo was held to three.