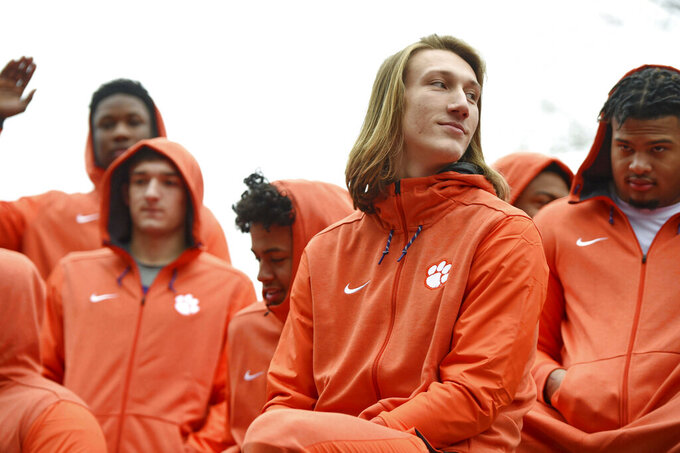 Posts circulating on social media Tuesday quoted Clemson quarterback Trevor Lawrence after the team's visit to the White House as saying: "President Trump got all our favorite foods. It was the best meal we ever had. Then we go and see the coastal elite media trashing it for not being organic vegan. We're football players, not bloggers. This was a perfect blue collar party."

Lawrence denounced the quote Tuesday tweeting, "I never said this by the way. I don't know where it came from. However the trip to the White House was awesome!"

"Everything that is presented in that meme is fabricated," Taylor said.

President Donald Trump served the team an array of fast food during their visit to celebrate the team's win in the national college football championship. Trump, a fast food lover, said he even paid for their meal himself because of the partial government shutdown, The Associated Press reported. The choice of menu was criticized by late-night TV hosts and others who found it beneath what should be served to national champions visiting the White House.

The false quote circulated in a post on social media with the claim overlaid in text over a photo of confetti falling onto the quarterback after his team's win 44-16 against the Alabama Crimson Tide on Jan. 7.

Taylor confirmed to the AP that Lawrence denied the quote on his Twitter account @Trevorlawrencee Tuesday afternoon.

This is part of The Associated Press' ongoing effort to fact-check misinformation that is shared widely online.