Ohio State falls to Michigan for 1st time since 2011 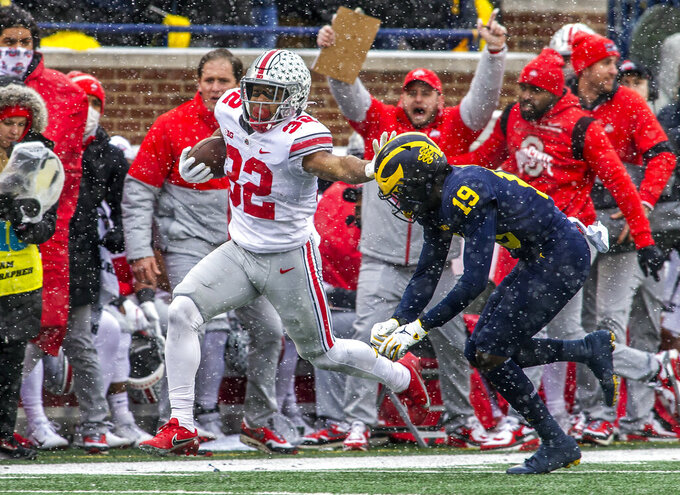 ANN ARBOR, Mich. (AP) — Run over by Michigan and buried by its own miscues, Ohio State felt the sting of losing its rivalry game for the first time in a long time.

“We haven’t been in this position forever,” Buckeye receiver Chris Olave said. “So, I don’t know what to say.”

No. 2 Ohio State was on the receiving end of a 42-27 thumping by No. 6 Michigan on Saturday that ended the Buckeyes' eight-game winning streak in the Big Ten's biggest rivalry, along with their streak of four straight conference title game appearances — all of which they have won.

The College Football Playoff is likely out of reach for Ohio State, too.

“It hurts, yeah," Ohio State coach Ryan Day said. "When you live this year-round, it hurts. There’s not much to say.”

He added: “I think we didn’t run the ball very well on offense, and what hurt us were some penalties, and we didn’t stop the run on the other side of the ball.”

“You have to stop the run in a Big Ten game,” said Buckeyes safety Bryson Shaw, who made an interception to thwart Michigan’s second red-zone drive of the game. “It’s embarrassing.”

Ohio State had 10 penalties for 66 yards – half coming on 5-yard false start flags – while Michigan had just two penalties for 20 yards.

“It was the environment,” Buckeyes offensive tackle Nicholas Petit-Frere said. “It was loud, and we were not executing. That’s on us. It puts us in a hole. It’s about mental toughness and focus and execution.”

C.J. Stroud threw for 394 yards and two touchdowns and said he was hoarse while calling the signals at the line of scrimmage.

“I lost my voice but I’ve been sick all week trying to get my voice back,” Stroud said. “Sometimes, you’ve got to play hurt…I don’t blame my line. I blame myself.”

The Buckeyes trailed, 14-13, at the half. However, they had a three-and-out after receiving the second-half kickoff, and the Wolverines drove 81 yards on three run plays to take control.

Ohio State never got closer than eight the rest of the way, while Michigan took 15-point leads at three junctures.

“We just weren’t able to turn the tides,” Day said.

“It sucks that it’s the worst thing ever,” said Shaw, a sophomore. “But we’ll be counting down the days to the game next year."