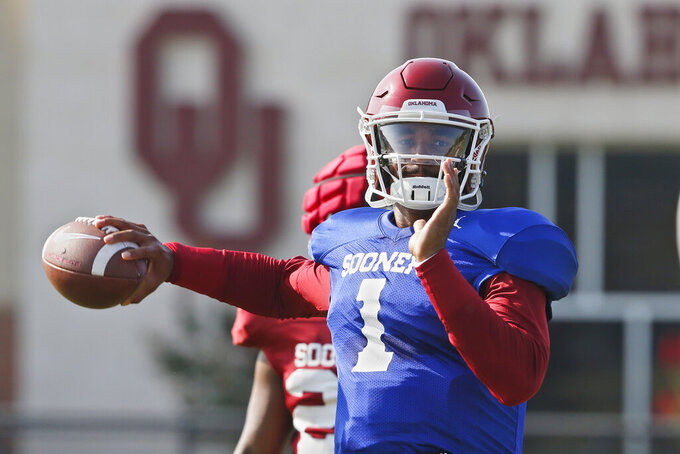 NORMAN, Okla. (AP) — Jalen Hurts' rise to the starting quarterback position at Oklahoma wasn't a foregone conclusion, despite his wealth of championship experience at Alabama.

Oklahoma coach Lincoln Riley took his time before naming Hurts the starter for the fourth-ranked Sooners' Sept. 1 season opener against Houston. Though Hurts played in three national championship games for Alabama and helped the Crimson Tide win the 2017 national title, Riley said he wanted to see how Hurts would adjust to a new system after he transferred to Oklahoma in January .

Hurts barely won the job over redshirt freshman Tanner Mordecai and true freshman Spencer Rattler. Hurts didn't clinch the job until Riley reviewed a recent scrimmage. Riley spent two years as Oklahoma's offensive coordinator and is entering his third as the Sooners' head coach, yet this might have been his toughest call.

"I just thought he was just slightly better here as it went on, and it was slightly," Riley said. "Probably the closest one (quarterback race) that we've had since I've been at Oklahoma."

Hurts started the 2016 and 2017 seasons and led Alabama to a 26-2 record. He lost the starting job to Tua Tagovailoa in 2018 but still played in 13 games. He replaced the injured Tagovailoa in the fourth quarter of the 2018 SEC championship game and rallied the Crimson Tide to a 35-28 win over Georgia.

Hurts has the numbers to go with the wins. He owns the Alabama quarterback career record with 23 rushing touchdowns and ranks second in school history among quarterbacks with 1,976 career rushing yards and 71 touchdowns responsible for. He gained 7,602 yards of total offense and threw for 48 touchdowns, both third in Alabama history.

Riley said Hurts' experience didn't factor into his decision, but it may have helped him when things got tough during camp.

"Just the overall feel of how it progressed," Riley said. "Honestly, all three of them had days where they were the best quarterback. Jalen just had a few more. His down days where maybe he wasn't his best were better than the other two right now at this point."

Hurts will now follow back-to-back Heisman Trophy winners Baker Mayfield and Kyler Murray. Hurts has said that was never a concern for him.

"I've had the same approach since I got here — to be the best quarterback I can be," Hurts said earlier in the month. "All that other stuff is what y'all want to talk about."

Riley said the future looks bright with Mordecai and Rattler. Mordecai, the No. 2 quarterback, was rated a four-star recruit by ESPN and a three-star prospect by 247Sports and Rivals. Rattler, a true freshman, is the No. 3 quarterback. He was the consensus No. 1 quarterback in the 2019 recruiting class. He passed for an Arizona state record 11,083 yards and ran for more than 1,000 during his prep career.

"Tanner Mordecai did a phenomenal job," Riley said. "Made a lot of big plays during camp. Spencer Rattler showed control and playmaking ability that's pretty rare for someone his age."