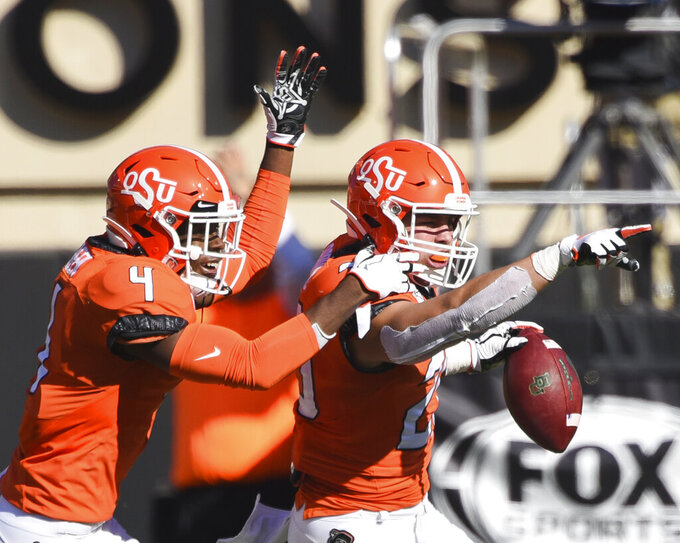 STILLWATER, Okla. (AP) — Last year as a freshman, Brock Purdy was Iowa State's third-string quarterback when he stepped on the field for his first meaningful action and he delivered a big win against Oklahoma State.

Heading into last season's contest, Oklahoma State was 4-1 and ranked No. 25 while Iowa State was 1-3. Due to injuries at the QB position, Purdy finally got on the field for the game's second series and was a revelation, completing 18 of 23 passes for 318 yards and four touchdowns while also rushing for 84 yards and a score. The Cyclones pulled off the 48-42 upset.

"We drew the short straw last year and they brought him out against us, he's been in ever since and he's played well," Oklahoma State coach Mike Gundy said of Purdy. "He's a savvy quarterback, he's very good. I think he's going to play in the NFL. He's somewhat unusually mobile for his size (6-1, 210) and he's strong for his size. He's a good football player, doesn't make a lot of mistakes."

Of course, Purdy has progressed significantly since that game, fashioning a 12-4 record overall. He leads the Big 12 and ranks fifth in the nation with 2,185 passing yards (312.1 yards per game), while he has 14 touchdowns and just four interceptions. He is also second on the Cyclones with 195 yards rushing and has a team-high six TDs on the ground.

Oklahoma State just surrendered 312 yards passing and a touchdown, as well as a rushing TD, to Charlie Brewer in Saturday's 45-27 loss to Baylor. On the season, the Cowboys have allowed an average of 258.7 passing yards per game, ranking 102nd out of 130 FBS schools.

Gundy detailed what he expects on Saturday from Purdy and Iowa State's offense, which ranks 15th in the nation with 481.1 yards per outing. The Cyclones have been especially dangerous late in games, scoring on 13 of 16 possessions (11 touchdowns, two field goals) in the fourth quarter of their last five contests, averaging 16.7 points.

"They're a good football team," said Gundy, whose team gave up 21 unanswered fourth-quarter points against Baylor. "They rush the football, do a little read-zone, throw it out in the flat a little bit, a lot of underneath crossing routes, and they just kind of play the game and then try to find a way to win in the fourth quarter, is what they've done. And they've gotten a little bit better, based on mature quarterback play."

Overall, Gundy is optimistic that his players will rebound from two disappointing losses in the row (including their 45-35 defeat at Texas Tech on Oct. 5 before their bye week).

"The players were enthusiastic, I was pleased with them, we got a lot of work done," Gundy said of his team's practice on Sunday. "We're in good shape, health-wise, so we're going to continue to work hard on minimizing turnovers."