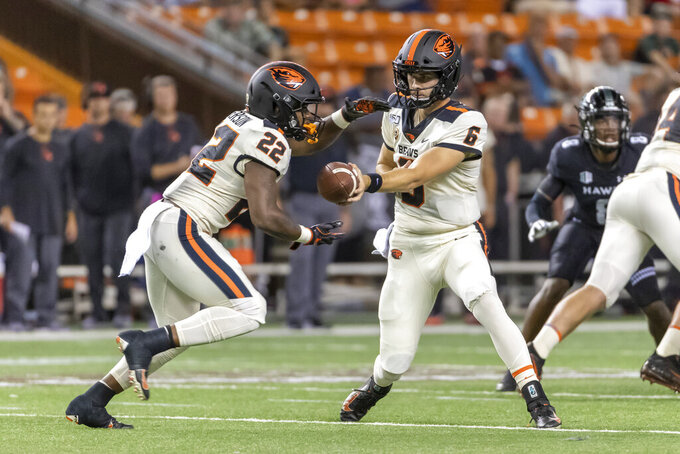 Oregon State quarterback Jake Luton (6) hands off the football to his running back Jermar Jefferson (22) during the first half of an NCAA college football game, Saturday, Sept. 7, 2019, in Honolulu. (AP Photo/Eugene Tanner) 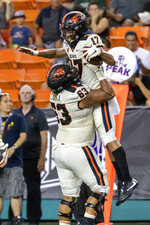 While the list of shortcomings that Oregon State needs to address is long, coach Jonathan Smith is still optimistic the Beavers are turning a corner.

Oregon State is 0-2 this season with losses to Oklahoma State and Hawaii heading into Saturday's game against the FCS-level Cal Poly Mustangs.

"I do think our guys are ready to respond here," Smith said this week. "Had a couple of games so far, haven't gone our way. But I know, and I'm confident, the guys will come back to work with the great challenge of being back at home, and see this next test, see if ultimately we can improve from Week 1 to Week 2 to Week 3."

Smith cited second-half penalties — including a pass interference call — as a reason the team blew a 14-point lead against the Rainbow Warriors for a 31-28 loss.

The Beavers were criticized for attempting a fake punt on their own 34 with 4:18 to play and the game tied at 28. It went awry, giving Hawaii back the ball and Ryan Meskell went on to break the stalemate with a 28-yard field goal with 2:17 left.

"Thought we caught them off guard, we didn't. There's risk-reward in this game. There's no question," Smith said. "We want to be aggressive."

Smith praised the defense, which saw Hawaii's run-and-shoot offense last weekend and will get Cal Poly's triple option this weekend.

A key for the Beavers going forward is finishing.

"You look at it, and there's some progress being made in a tight ballgame and now we've got to take that next step and seize that moment and finish on the right side of the scoreboard," Smith said. "It comes down to trusting your preparation and fundamentals that you've been working on all fall camp and it was noticeable that some of that went away in the fourth quarter."

The Mustangs (1-1) are playing the second game of a three-game road trip. Cal Poly won its opener at home against San Diego before falling on the road to Weber State last weekend.

SCOUTING CAL POLY: Coach Tim Walsh is in his 11th season at Cal Poly, dating back to when the team was part of the Great West Conference. The Mustangs went 5-6 last season after going 1-10 the year before. Cal Poly has just one other meeting against a Pac-12 opponent: a 2015 loss to Arizona State. However, they also played ASU twice before the Sun Devils joined the Pac-12.

In its last 16 games against FBS-level opponents, Cal Poly has won four times, with the most recent a 24-22 victory over Wyoming in 2012. The Mustangs did not play an FBS team last season, breaking a streak of 13 straight years with one on the schedule.

SUSPENSIONS: Oregon State left guard Gus Lavaka was suspended by Smith for the first half of Saturday's game after throwing punches at a Hawaii player following the loss last weekend.

"Gus made a bad choice in his response, there's no question," Smith said. "Below the standard that we want around here."

Cornerback Kaleb Hayes was also suspended for shoving a teammate in frustration during the game after an unsportsmanlike conduct call.

JOB SECURITY: Smith said the team is staying with sixth-year quarterback Jake Luton as its starter. Luton won the preseason camp competition over Nebraska transfer Tristan Gebbia. Luton completed 15 of 32 passes for 169 yards against Hawaii but the performance was lackluster.

"He did some good things. There are some plays he'd like back. That's going to happen," Smith said. "I do feel like we have two guys who can score some points, but we're not ready to say Luton isn't the guy."

JEFFERSON EMERGES: Jamar Jefferson was slowed by Oklahoma State in the opener but last season's Pac-12 Freshman of the Year found a groove against Hawaii, rushing for 183 yards and a touchdown on 31 carries. Last season against FCS opponent Southern Utah, Jefferson ran for 238 yards.