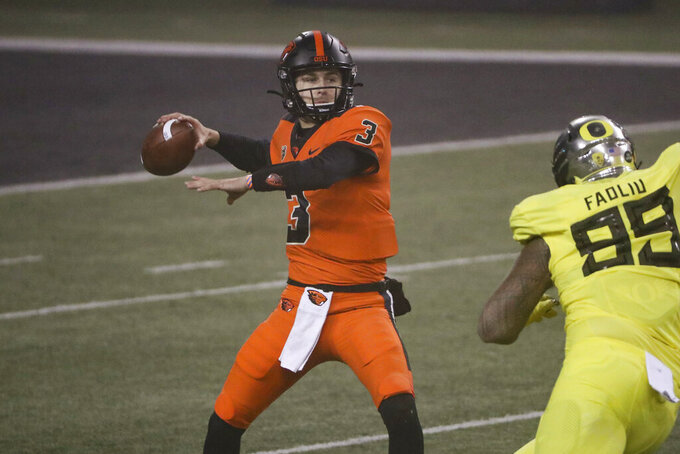 CORVALLIS, Ore. (AP) — Taking his first college snap after starting quarterback Tristan Gebbia limped off, Chance Nolan scored on a 1-yard, fourth-down run with 33 seconds left to give Oregon State a 41-38 upset victory over No. 9 Oregon on Friday night.

Jermar Jefferson ran for 226 yards and two touchdowns to help the Beavers (2-2) win their second straight game. Jefferson has run for at least 100 yards in each of Oregon State’s four games and is on pace to hit 1,000 despite the short season.

Jefferson said the win meant “everything" because of losses to the Ducks in his first two seasons. He said he studied hard for the game.

“I really don’t feel like I get the recognition I deserve,” he said. “I’ve just got to put my head down and keep working hard. I’ve been underrated my whole life, so I’m used to it.”

Oregon (3-1) had won six in a row and three straight over the rival Beavers. The loss dashed any slim hopes the Ducks had of a spot in the College Football Playoffs. The Ducks were ranked No. 15 in the first CFP rankings released Tuesday.

Gebbia threw for 263 years and a score and had a touchdown run during the foggy game at Reser Stadium. While no fans were allowed in the game, cars passing near the stadium honked for the home team in the aftermath.

Oregon State's last win over a ranked team came in 2014 when the Beavers downed No. 7 Arizona State.

Tyler Shough threw for 266 yards and two touchdowns, but also had two interceptions, for Oregon.

"Got to finish games," Ducks coach Mario Cristobal said. “We didn't finish it.”

It was the 124th edition of the rivalry that dates to 1894. This summer amid racial injustice protests nationwide, both schools decided to drop the “Civil War” nickname.

Gebbia scored on a 1-yard keeper early in the fourth quarter to pull Oregon State to 31-26.

Oregon State intercepted Shough on the ensuing drive and got the ball on the Oregon 33. Gebbia found Kolby Taylor with a 31-yard pass before Jefferson scored on a 2-yard run. Gebbia's keeper on the two-point conversion gave Oregon State a 34-31 lead.

An Oregon State penalty helped the Ducks on their drive, capped by Cyrus Habibi-Likio's 1-yard dash into the end zone, to give Oregon back the lead with 8:27 left.

After the teams traded possessions that ended on downs, the Beavers got one more chance. Gebbia hit Taylor with two passes on the drive, putting the Beavers on the Oregon 6.

Gebbia appeared to score but the officials put the ball on the 1 on third down. Gebbia ran again, and limped to the sideline while the play was under review. Oregon was offside, but no penalty was called. That set up Nolan's touchdown run on fourth down on the only play of his college career.

“It means a lot to a lot of people, not just the guys sitting in the locker room,” Oregon State coach Jonathan Smith said. “It’s too bad Reser Stadium could not be filled right now and have a win like that because it means so much to so many people, especially our in-state kids.”

Jaylon Redd scored on a 37-yard run on Oregon's first drive of the game, but Jefferson answered for the Beavers with an 82-yard touchdown run, a career long.

Shough scored on a 1-yard keeper to put Oregon back in front. After an Oregon State field goal, Devon Williams caught Shough's 60-yard touchdown pass on a second-and-21 play.

Trailing 21-13 after another field goal, Oregon State tried to convert on fourth-and-3 and failed, giving the Ducks the ball on the Beavers' 44. The drive ended with Henry Katleman's 33-yard field goal.

Gebbia's 8-yard touchdown pass to Zeriah Beason closed the Beavers to 24-18 but a two-point conversion failed. Oregon scored on Shough's 4-yard scoring pass to Hunter Kampmoyer to pull away again before Gebbia's 1-yard keeper narrowed the gap to 31-26 early in the final quarter.

“It hurts for sure. One of the worst feelings on earth is losing," Shough said. “We're just going to take it and learn from it.”

The Ducks held off UCLA and former coach Chip Kelly 38-35 last Saturday. The Beavers were coming off their first win, a 31-27 victory over California last weekend. Jefferson ran for 196 yards and a touchdown.

Oregon: Freshman linebacker Noah Sewell, who was carted off the field with what appeared to be a scary injury last weekend, played for the Ducks. ... The Ducks won 24-10 last year en route to the Pac-12 championship game and the Rose Bowl. ... Oregon holds a 66-48-10 advantage in the series.

Oregon State: Jefferson, who struggled with injuries last season after winning Pac-12 Freshman of the Year honors in 2018, has run for 75 or more yards on his first carry in the past two games. ... Jefferson's rushing yards were the most of any player in the rivalry series. ... Oregon State had lost 15 straight games to teams ranked in the AP Top 25

Oregon plays at Cal next weekend. The Golden Bears fell 24-23 to rival Stanford in the Big Game earlier Friday.