Oregon visits Utah with implications for the Pac-12 South 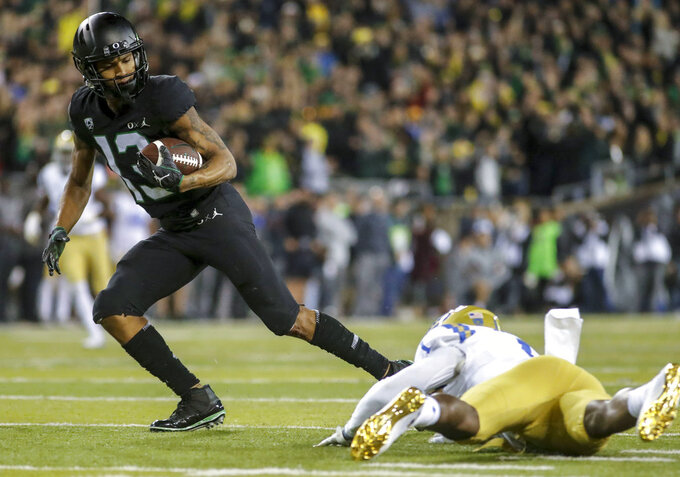 Oregon wide receiver Dillon Mitchell (13), escapes a tackle in the fourth quarter and runs in for a touchdown against UCLA during an NCAA college football game in Eugene, Ore., Saturday, Nov. 3, 2018 (AP Photo/Thomas Boyd)

GAME OF THE WEEK: Oregon at Utah. This game has lots of drama, with Utah missing quarterback Tyler Huntley, who is out for the regular season with a broken collarbone. The Utes will start redshirt freshman Jason Shelley as the team seeks to remain atop the jumbled Pac-12 South. "Losing Tyler, he was a heck of a player, so we have to make sure Jason knows we have complete confidence in him and I believe he does," coach Kyle Whittingham said. The Ducks, meanwhile, are bowl eligible and on the upswing after snapping a two-game losing streak with a victory over UCLA.

MATCHUP OF THE WEEK: Washington State quarterback Gardner Minshew II against Colorado's defense. The Buffaloes are in the bottom half of the league for pass defense, allowing 237 yards a game, which means Minshew may get a chance to up his Heisman profile with a big day. Minshew has thrown for at least 300 yards in every game this season and leads the nation in completions per game (36.36), passing yards per game (390.8) and total offense per game (397.4). Minshew is a must-watch this season.

NUMBERS GAME: The Pac-12 has four of the top seven running backs at the FBS level: Arizona State's Eno Benjamin (fifth, 123.7 yards per game), Arizona's J.J. Taylor, (sixth, 122.1 yards), Oregon State's Jermar Jefferson (tied for seventh, 121.3 yards), Utah's Jack Moss (tied for seventh, 121.3 yards per game). ... There is the possibility that all of the Pac-12 South's teams could end the season tied for first in the standings. ... In the North, if Washington and Washington State both win out, the division will be decided by the Apple Cup. ... Home teams hold just a 22-16 edge this season in conference play. ... Washington linebacker Ben Burr-Kirven leads the league with 134 tackles this season. He has 10 or more in eight games this season. .. Eno Benjamin tops the league in rushing. His 1,113 total rushing yards are the third-most for the Sun Devils since they joined the conference. He's got 100-plus rushing yards in six games this season.

UPSET WATCH: Not a lot of upset specials in the league this week, but the most intriguing would be a UCLA victory over Arizona State in Tempe on Saturday — just because it would really stir up more chaos in the South. And it feels like Bruins coach Chip Kelly may be poised to pull off an encouraging win in a disappointing first season. The Sun Devils are 13½-point favorites.