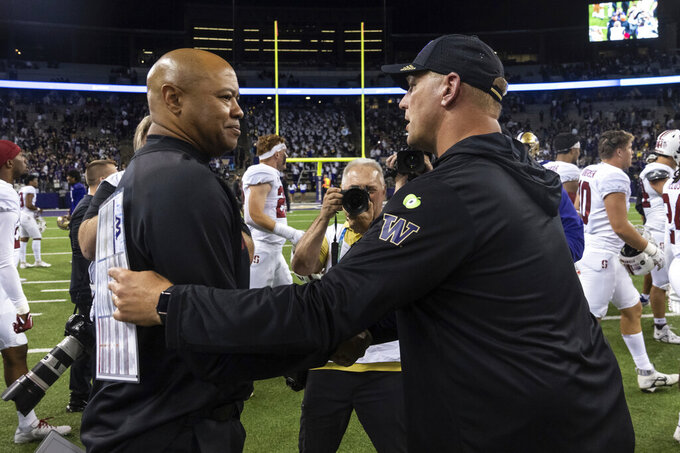 When Oregon got throttled by top-ranked Georgia and Utah lost at Florida, it appeared as though the Pac-12 was headed toward another College Football Playoff miss.

One week into the season and two of the conference's top teams had already failed big early tests.

Flash forward three weeks and it seems the Pac-12 might be in good shape after all.

The Ducks and Utes bounced back with big wins and the top of the conference looks strong, with four teams in the top 15 for the first time since 2016.

It's still early, but the Pac-12 is putting itself in position to get a team through to the CFP for the first time since Washington in 2016-17.

A look at how the top of the Pac-12 is stacking up headed into the first weekend of October:

The No. 6 Trojans (4-0, 2-0 Pac-12) seem to have quickly returned to glory in their first season under Lincoln Riley. The former Oklahoma coach brought quarterback Caleb Williams with him to Southern California and they have thrived through the first four games.

Williams has thrown for 1,054 yards and nine touchdowns, adding 100 yards and two more scores rushing. USC's defense has been opportunistic, leading the nation with 11 interceptions while tied for the lead with 14 takeaways.

The Trojans survived a scare against scrappy Oregon State over the weekend to start 4-0 for the first time since 2012. USC has to play at Utah on Oct. 15, but avoids Washington and Oregon this season.

The 12th-ranked Utes opened the season with a tough road loss at The Swamp in Florida, but have won three straight lopsided games.

Outside of a costly interception late against the Gators, quarterback Cam Rising has been sharp, throwing for 954 yards and 10 TDs. Utah (3-1, 1-0) has a physical defense and is third in the FBS, allowing 132.8 yards passing per game.

The Utes also have a veteran team that won the Pac-12 championship last season. The bad news: tight end Brant Kuithe, their leading receiver, is out for the season with a knee injury.

Utah plays Oregon State this weekend and has tough games against USC and Oregon still on the schedule.

The Ducks' playoff chances took an immediate hit with a 49-3 loss to reigning national champion Georgia in their opener.

No. 13 Oregon (3-1, 1-0) bounced back with a decisive win over a good BYU team and outlasted previously undefeated Washington State 44-41 last week.

The Ducks were no match for the Bulldogs in any aspect — few teams are — but have averaged 51.6 points the past three games. Oregon's biggest weakness is its pass defense. The Ducks are allowing 72.5% of passes to be completed, third worst in the country.

Oregon's biggest tests left in the season will come in back to back games against Washington and Utah.

The Huskies have made a quick turnaround in their first season under coach Kalen DeBoer.

Quarterback Michael Penix Jr. has been superb now that he's healthy, throwing for an FBS-best 1,388 yards and 12 TDs with one interception. No. 15 Washington (4-0, 1-0) picked up a solid home win against Michigan State and has 15 sacks this season, including eight against Stanford last week.

The Huskies play their first road game at undefeated UCLA on Saturday and have to face Oregon on Nov. 12.

After winning at Colorado for the first time since 2014 last Saturday, the Bruins (4-0, 1-0 Pac-12) have their longest winning streak since winning the first eight games in 2005.

UCLA had a hard time getting past South Alabama and opened its Pac-12 schedule with a win against the struggling Buffaloes.

The Bruins will find out how good they are over the next three weeks, a brutal stretch that includes home games against Washington and Utah before heading to Eugene to play the Ducks on Oct. 22.