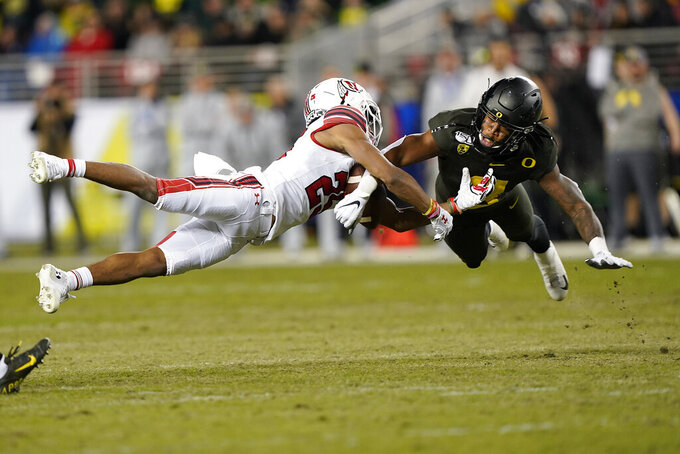 FILE - In this Dec. 6, 2018, file photo, Oregon safety Jevon Holland (8) breaks up a pass for Utah wide receiver Jaylen Dixon (25) during the first half of the Pac-12 Conference championship NCAA college football game in Santa Clara, Calif. A group of Pac-12 football players on Sunday, Aug. 2, 2020, threatened to opt out of the coming season unless its concerns about competing during the COVID-19 pandemic and other racial and economic issues in college sports are addressed. (AP Photo/Tony Avelar, File)

The Pac-12 responded Monday to football players who have threaten to opt-out of the season because of concerns related to health and safety, racial injustice and economic rights with a letter touting the conference’s work in those areas and an invitation to meet later this week.

A letter from Pac-12 Commissioner Larry Scott, dated Aug. 3, was sent to 12 football players leading the #WeAreUnited movement. The letter was obtained by The Associated Press and first reported by Sports Illustrated.

The players say they have been communicating with more than 400 of their peers throughout the Pac-12. The group released a lengthy list of demands Sunday and said if they are not addressed they will not practice or play. The group said it reached out to the Pac-12 on Sunday to request a meeting. In the letter, Scott said he was eager to discuss their concerns.

“I will come back to you in the coming days following discussion with our members and student-athlete leaders to schedule a call for this week to discuss the matters that you have raised,” Scott wrote.

Also Monday night, Washington State coach Nick Rolovich said in a statemen t he regretted cautioning one of his players about being part of the #WeAreUnited movement. A recording of a conversation between Rolovich and receiver Kassidy Woods obtained by the Dallas Morning News revealed the coach seemingly warning the player that being involved with the group would hurt his standing with the team. Woods had called Rolovich to inform him he was opting out of the season for health reasons related to COVID-19.

“I spoke with Kassidy Woods in a private phone conversation last Saturday afternoon. This was before the #WeAreUnited group had released its letter of concerns,” said Rolovich, who is in his first season was Washington State coach. "Without knowing the concerns of the group, I regret that my words cautioning Kassidy have become construed as opposition. I’m proud of our players and all the Pac-12 student-athletes for using their platform, especially for matters they are passionate about. WSU football student-athletes who have expressed support for the #WeAreUnited group will continue to be welcome to all team-related activities, unless they choose to opt out for health and safety reasons.”

The #WeAreUnited players' demands focused on four areas: health and safety protections, especially protocols related to COVID-19; guarding against the elimination of sports programs by schools during an economic downturn; ending racial injustice in college sports; and economic freedom and equity.

— Medical advisory committee working on COVID-19 protocols and webinars for student-athletes and their parents;

— Recent initiatives to address racial inequities such as the formation of a social justice & anti-racism advisory group that includes student-athletes representatives.

Scott also listed 10 areas in which, he wrote, “The Pac-12 has been a leader in supporting student-athlete health and well-being ...” Included were enhanced medical coverage post-eligibility; cost-of-attendance stipends added to the value of scholarship; mental health support; and the Pac-12's support of reforming NCAA transfer rules to allow athletes more freedom to switch schools.