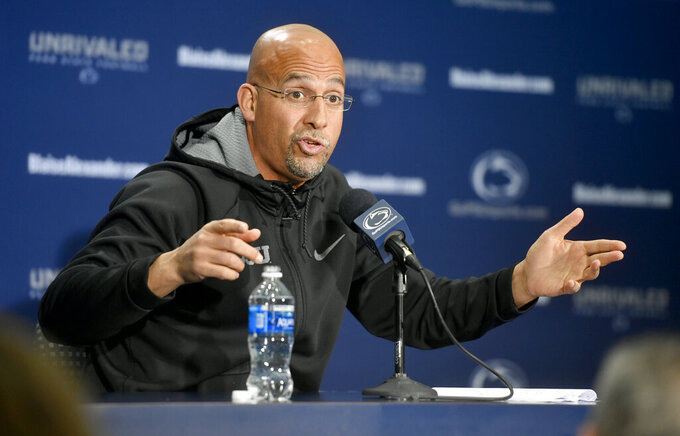 ARLINGTON, Texas (AP) — Penn State has hired Kirk Ciarrocca as offensive coordinator and quarterbacks coach, after he held the same role for Big Ten foe Minnesota for the past three seasons.

Ciarrocca replaces Ricky Rahne, who was named head coach at OId Dominion earlier this month. Penn State head coach James Franklin, whose team plays Memphis in the Cotton Bowl on Saturday, made the announcement on Thursday.

Franklin said he wanted an established play-caller, and also believes strongly in “hiring people that want to be here, and Kirk really wanted to be here. ... He's fired up about being here."

Ciarrocca grew up as a Nittany Lions fan in Lewisberry, Pennsylvania, and has deep ties to the state. He has spent the majority of his 30-year coaching career in the Mid-Atlantic region. Ciarrocca came to the Midwest in 2013 to join head coach P.J. Fleck at Western Michigan and followed Fleck to Minnesota in 2017.

The Gophers, who beat Penn State 31-26 on Nov. 9, enjoyed a breakout season behind Ciarrocca's play-calling and the development of quarterback Tanner Morgan.

No. 16 Minnesota (10-2, No. 18 CFP), which plays Auburn in the Outback Bowl next week, is tied for third in the Big Ten with No. 13 Penn State (10-2, No. 10 CFP) with an average of 34.3 points per game. Morgan leads the conference with an average of 247.9 passing yards per game, setting single-season program records for yards and touchdowns.

“We wanted to get a proven play-caller, a guy that's got a history of calling plays, but also somebody that our systems were similar, that there would be some carryover,” said Franklin, who expects a blend of what Penn State does and what Ciarrocca has done, specifically at Minnesota.

Ciarrocca has been an offensive coordinator for 18 seasons. He also has had stints on the staffs at Temple, Delaware Valley, Western Connecticut State, Princeton, Penn, Delaware, Rutgers and Richmond.