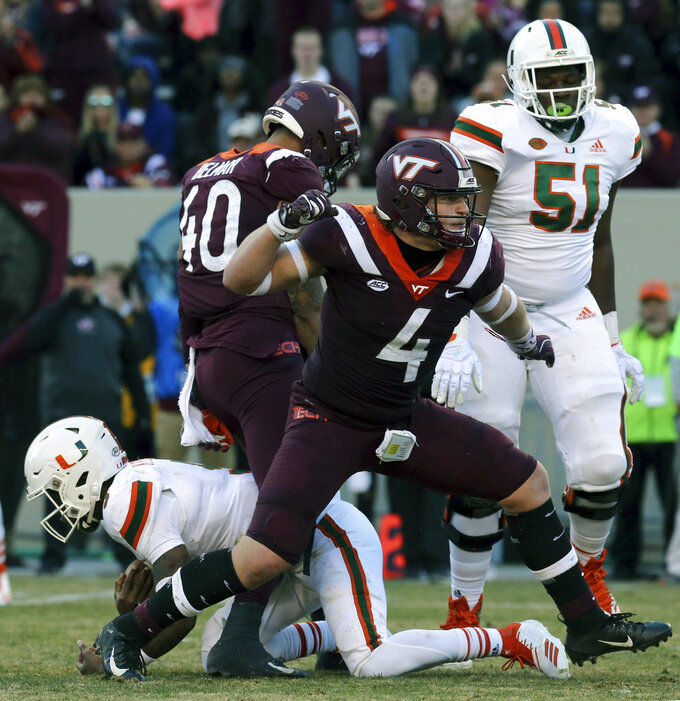 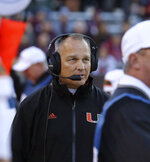 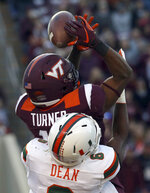 BLACKSBURG, Va. (AP) — One good performance seemed to make a month of bad ones disappear for Miami.

N'Kosi Perry threw for two touchdowns and ran for another, Cam'Ron Davis scored twice and Miami snapped a four-game losing streak with a 38-14 victory against Virginia Tech on Saturday.

"It was very sweet," Davis said. "We're very excited. All the stuff we went through, it all passed. Now we're on a new journey."

Davis scored on a 42-yard run and a 16-yard reception, both in the third quarter with a 51-yard punt return touchdown by Jeff Thomas sandwiched in between as Miami (6-5, 3-4 Atlantic Coast Conference) turned a 17-14 halftime lead into a comfortable victory.

"It was probably the most difficult thing I've been through as a coach," Mark Richt said of the losing streak. "We stopped the bleeding."

Ending the skid came with a bonus — bowl eligibility.

"It meant so much to us," cornerback Trajan Bandy said. "We work so hard in practice. We knew coming into this game it was going to be a battle for us. ... We go out and play fast. I think we did a great job tonight."

The Hokies (4-6, 3-4) lost their fourth straight, and fourth straight at home, for the first time since they dropped four in a row at home spanning the 1973 season-finale and first the three of the 1974 season. Virginia Tech will have to beat Virginia on Friday — something they have done in each of the last 14 meetings — and then add a game on Dec. 1 and win that, too, to extend to 26 their streak of seasons ending in a bowl game. An announcement about a game to replace one against East Carolina lost to Hurricane Florence could come as early as Sunday.

University officials had no comment Saturday, but the Richmond Times-Dispatch reported Saturday that the Hokies have reached a contingency agreement to play Marshall at Lane Stadium, but only if bowl eligibility is available. Marshall also lost a game to the storm.

Cleaning up some defensive mistakes, defensive coordinator Bud Foster said, "We will give ourselves a chance to win, and hopefully we'll get an opportunity to go play one more, and then one more after that."

The offense stalled thereafter, and coach Justin Fuente blamed two drives that came up empty in the third quarter.

On the first, Brian Johnson was wide left on a 46-yard field goal try, and the Hurricanes then drove 71 yards in eight plays to Davis' long touchdown run. On the next, Damon Hazleton fumbled after a catch and Sheldrick Redwine recovered at the Virginia Tech 41. A third drive was hampered by a holding call that created a third-and-16, and "by then, the game was pretty far out of hand," Fuente said.

Miami also took a page from how the Hokies' recent opponents had found success and ran the ball. It produced a 71-yard drive to Perry's 1-yard scoring run 33 seconds before halftime, and another run-heavy 71-yard touchdown drive to Davis' run in the third quarter.

Virginia Tech: The Hokies year of the injury continues as they got several of their injured defensive players back, but were without wide receivers Eric Kumah and Hezekiah Grimsley. They also remain inept after halftime at home, where the last three opponents had each outscored them 14-0 in the third quarter and Miami had a 21-0 edge.

Virginia: The Hokies host state rival Virginia on Friday and will be seeking their 15th consecutive victory in the series.