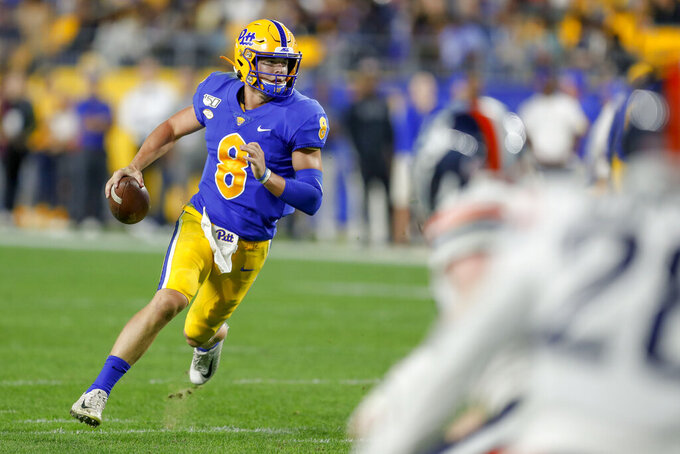 Pittsburgh quarterback Kenny Pickett (8) scrambles for a first down against Virginia in the second quarter of an NCAA college football game, Saturday, Aug. 31, 2019, in Pittsburgh. (AP Photo/Keith Srakocic)

PITTSBURGH (AP) — The debut of Pittsburgh's new-look offense included an alarming sight that kept repeating itself during a season-opening 30-14 loss to Virginia : quarterback Kenny Pickett picking himself up off the turf after taking another shot by the Cavaliers' swarming defense.

It was just one week and just one loss. Yet coach Pat Narduzzi is well aware Pickett can't endure that level of abuse regularly if the Panthers (0-1) want to be a factor in the Atlantic Coast Conference's wide-open Coastal Division.

"Kenny is a tough dude," Narduzzi said Monday. "We don't want him to get hit like he did. The big thing is protect him. Big thing is half those hits, the ball should already be gone and we shouldn't have that problem."

Narduzzi anticipated growing pains as the Panthers adjust to Whipple's system. He didn't expect his receivers to drop a handful of passes or Pickett air-mailing teammates running wide open down the field. He considers those errors self-inflicted, one of the reasons he's not overly concerned about his offense after one game. He believes a large number of the mistakes Pitt made against the Cavaliers will disappear as his players become comfortable in the new offense.

"I don't see it as frazzled, I just see it still a guy that's maturing as he gets into this new offense and learning from what he needs to do," Narduzzi said, later adding, "I think (Pickett) is one of those guys that can see how much better he can be."

The Panthers will need Pickett to be better going forward. Pickett completed 21 of his 41 attempts for 185 yards with a touchdown and two interceptions, both in Pitt territory. The first came on third down in the third quarter with the Panthers trailing by two. Virginia linebacker Matt Gahm stepped in front of Pickett's pass to give the Cavaliers the ball at the Pitt 29. Five plays later, the Cavaliers pushed their lead to nine and the Panthers never recovered.

"Just got to be smart and throw it away," Pickett said.

Even if it's an option that goes against Pickett's aggressive nature. The player who made a splash in his first start by stunning then-undefeated Miami in the 2017 regular-season finale prefers to hang in the pocket and make something happen. Too often against the Cavaliers, however, that something turned out to be an incompletion or suffering a crunching hit, or both.

While Narduzzi allows that running the ball earlier might have helped take some of the pressure off Pickett early in the game — the Panthers threw it on each of their first six snaps — he's still not sure he'd have changed the plan against the Cavaliers.

"When you see open guys, you're going, 'Man, we had a chance to make some big plays,'" he said.

Pickett did enjoy one stretch in the second quarter when he made 9 of 11 passes while leading Pitt on a pair of long touchdown drives that gave the team a 14-13 halftime lead. Yet the momentum disappeared after the break, when Pickett hit just 9 of 22 passes for 63 yards and the two picks.

There are no plans to panic or return to the run-heavy approach the Panthers relied on while winning the Coastal last fall. Whipple was brought in specifically to make Pitt more dynamic. Narduzzi is confident it will happen sooner rather than later.

"We've just got to make plays," Narduzzi said. "And if we're going to throw the ball like we did and open it up and start to throw it early instead of just running it every down, then we've got to make those plays to keep the sticks moving."