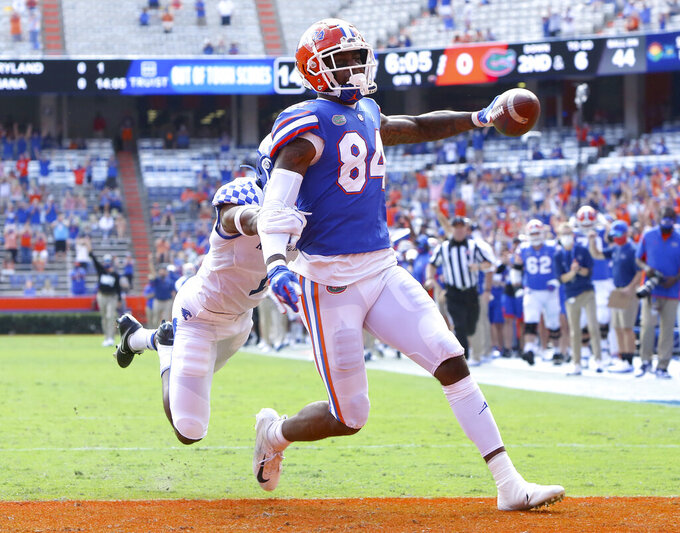 His chest “got hot" and his heart started beating fast. Once he stepped on the field and saw one-on-one coverage, his eyes had to widen as well.

Pitts scored three touchdowns in his return from a concussion and a broken nose — all on perfect passes from Heisman Trophy front-runner Kyle Trask — and No. 6 Florida overcame a sluggish start to beat Kentucky 34-10 Saturday in the Swamp.

The Gators (7-1) avenged a home loss to the Wildcats (3-6) two years ago and put themselves on the verge of returning to the Southeastern Conference championship game for the first time since 2016. Pitts and Trask look every bit ready for the big stage.

“It was just getting back in the groove and playing how I’ve been playing,” Pitts said.

The junior tight end missed the last 10 quarters following a vicious hit against Georgia that knocked his helmet so sideways that his face mask fractured his septum. He had surgery and sat out two full games. Trask wasted little time reconnecting with his favorite and most talented target.

They misfired on Florida's opening down but Trask found Pitts for a 56-yard touchdown four plays later. Pitts ran away from starting cornerback Kelvin Joseph on the score.

“He causes a lot of mismatches for defenses and chaos in the back end trying to guard him,” Trask said.

“He's such a dynamic playmaker,” coach Dan Mullen said. "He can turn some smaller gains into some pretty explosive, big plays. I think he does an amazing job of doing that. He creates matchup problems for you. He’s hard to deal with one on one, and if you get him one on one, we can take advantage of it.”

Trask did break one of Wuerffel’s records Saturday. He became the first player in school history with at least three TD passes in eight consecutive games, topping Wuerffel’s mark of seven set in 1996.

Trask is on pace to pass Wuerffel for TDs, too, and it could happen in his final two regular-season games. More importantly for Trask and the Gators, though, is clinching the East with a victory at Tennessee next week.

“The sky's the limit,” Trask said. “We have huge goals for this team.”

The Wildcats (3-6) kept Florida’s high-scoring offense in check for the first half, thanks partly to a fumble and a dropped third-down pass.

Kadarius Toney turned the game by taking advantage of a huge mistake by All-American punter Max Duffy. Kicking from their own 10-yard line, the Wildcats called for a kick left, but Duffy shanked it right.

Kentucky’s coverage unit surrounded Xzavier Henderson on one side while Toney caught the ball on the other with no one around him. He went untouched for a 50-yard score that put the Gators up 14-10 with 42 seconds left.

The Wildcats added to their self-inflicted woes with three straight penalties to start the third quarter, giving Florida 39 free yards and setting up Trask’s second TD pass to Pitts.

“There’s nothing more aggravating to a defense than when you have a chance for a sack or no-yard gain or lost yards gain and you have a 15-yard penalty,” Stoops said. “It just breaks your back.”

Kentucky: The Wildcats played without leading rusher Chris Rodriguez for the second consecutive week and averaged 3.4 yards a carry. It was far from ideal for a team built to run the ball and stay in short-yardage situations on second and third downs.

Florida: Mullen will have plenty to address after a second straight ho-hum performance. The defense struggled early and offensive miscues put the Gators in a small hole. But Trask, Pitts and Toney helped mask many of the flaws.

Pitts said several Kentucky defensive backs, including Joseph, were talking trash on social media before the game and said it gave him “that extra boost." He even got a warning from officials — and Mullen — for yapping a little too much after his third score.

“If you're going to trash talk, you better back it up,” Mullen said.

Kentucky: Hosts South Carolina next Saturday. The Wildcats have won five of the last six meetings.

Florida: Can secure a spot in the title game in Atlanta by beating Tennessee for the 15th time in the last 16 years.