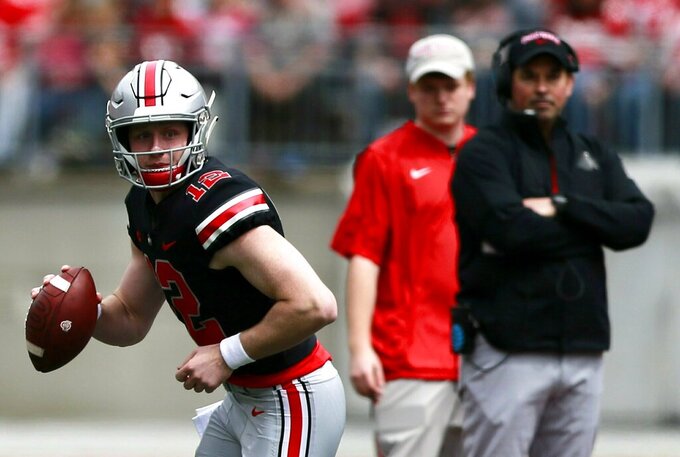 COLUMBUS, Ohio (AP) — Matthew Baldwin, the Ohio State quarterback who was expected to back up the highly touted Justin Fields this fall, said he intends to transfer.

The redshirt freshman released a statement on Twitter on Thursday saying he feels it would be better for him to move on after his first productive spring practice since rehabbing from a knee injury.

"At the same time, spring was a tough time for me personally," he said in the Twitter post. "My family and I have prayed a lot and talked a lot about where I belong and what it best for me. I want everyone to know this isn't done out of anger or frustration, but I'm not just a football player."

Baldwin competed in spring practice with Fields, who transferred to Ohio State after Ryan Day was named successor to the retiring Urban Meyer and it became clear that star quarterback Dwayne Haskins Jr. would leave early for the NFL.

Baldwin, from Austin, Texas, in his statement thanked Day, who had personally recruited him when Day was Meyer's quarterbacks coach.

But Fields, who transferred to Ohio State after backing up Jake Fromm as Georgia last season, was one of the top recruits in the nation in 2018 and is widely seen as a perfect fit for Day's offense and a future NFL quarterback.

Baldwin is the second Ohio State quarterback to transfer since coach Day persuaded Fields to transfer to join the Buckeyes. Tate Martell, who was the backup to Haskins last season, left Ohio State and quickly joined Miami.