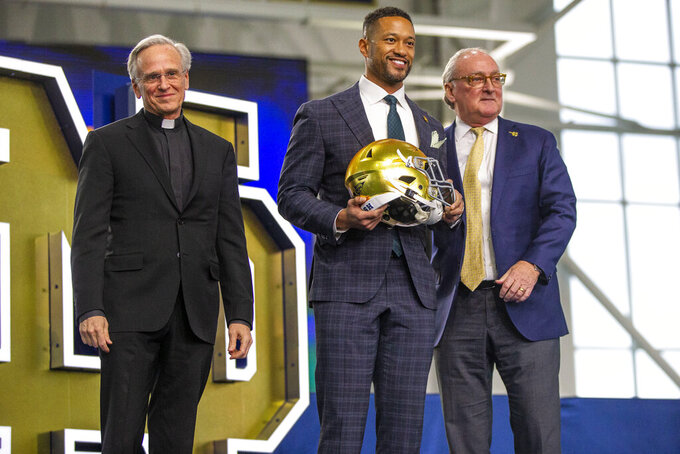 FILE - Notre Dame head football coach Marcus Freeman holds a helmet while posing for a portrait with University president John I. Jenkins, left, and Athletic Director Jack Swarbrick during a news conference on Dec. 6, 2021, at the Irish Athletic Center in South Bend, Ind. Swarbrick told The Associated Press on Tuesday, Aug. 30, 2022, that the Fighting Irish's position is even stronger now than when he stepped into the job in 2008, bolstered by success on the football field and investments in the program. (Michael Caterina/South Bend Tribune via AP, File)

SOUTH BEND, Ind. (AP) — Notre Dame is as confident as ever that the treasured football independence of the Fighting Irish is safe despite the maelstrom that is college sports.

Notre Dame athletic director Jack Swarbrick told The Associated Press on Tuesday that the program's position is even stronger now than when he stepped into the job in 2008, bolstered by success on the field and investments in the program.

“I think it's probably less threatened than it was back then,” Swarbrick said. “Part of that may be the natural growth and my understanding of the value of independence. But part of it is, I think we’ve done a number of things to position us to be better and to compete effectively.”

The fifth-ranked Fighting Irish begin their first full season under new coach Marcus Freeman on Saturday night at No. 2 Ohio State. Notre Dame is coming off its fifth straight double-digit victory season, a school record, and has had just one losing season since 2010, Brian Kelly's first as coach.

When Swarbrick arrived losing seasons had become fairly routine in South Bend. From 1997-2009, the Fighting Irish had more seasons under .500 (four) than seasons with at least 10 victories (two).

“We had some lean years back then and ... we’ve only had one in the past 10 years," Swarbrick said.

The national championship remains elusive, but Fighting Irish football is healthier than it's been since Lou Holtz led Notre Dame to its last title in 1988. Since the 2012 season, Notre Dame has made the College Football Playoff twice and played in a BCS championship game.

“That’s at the core of whether you’re threatened or not. If we can’t compete at that level, you got a choice to make,” Swarbrick said.

As conference realignment brings consolidation of the biggest brands and bluest bloods in college football — USC and UCLA to the Big Ten, Texas and Oklahoma to the Southeastern Conference — Notre Dame remains the most valuable free agent on the market.

Swarbrick said representatives of several conferences reached out to Notre Dame over the last six months to gauge the school's interest in a membership that would include football. He said Notre Dame has not had discussions with anyone about joining a conference.

Swarbrick has said that as long as Notre Dame has a strong television partner to broadcast home football games, reasonable access to the CFP and a conference home for its Olympic sports, there is no pressure to change.

Most of Notre Dame's teams compete in the Atlantic Coast Conference. That membership includes a football scheduling arrangement requiring Notre Dame to play five ACC teams per season, plus a commitment by the Irish to join the ACC if they were to give up independence. That contract runs concurrent with the ACC's media rights deal with ESPN and expires in 2036.

Before joining the ACC, most Notre Dame teams competed in the Big East.

“My experience with Notre Dame is they value independence. It’s who they are. And I think they will protect that at virtually any cost,” former Big East Commissioner Mike Tranghese said.

Tranghese, who was part of the commissioner group that ran the BCS, said there was never any desire among the conferences to create a postseason structure that would force Notre Dame into a conference. And he doubts there would be now.

“What's the incentive? Why would you force Notre Dame to go join somebody else and make them stronger?” Tranghese said.

The Big Ten recently finalized a media rights agreement worth more than $7 billion over seven years. The Big Ten and SEC are poised to pull away from the other Power Five conferences in terms of revenue.

Notre Dame’s television deal with NBC runs through the 2024 football season. The backloaded agreement that went into effect in 2016 paid the school an average of $15 million per year.

Former Fox Sports Networks President Bob Thompson estimated that if Notre Dame can earn upward of $65 million from a new television deal and membership in the ACC, the Irish would likely be comfortable remaining independent.

“Notre Dame is a brand unto itself," Thompson added. "Whether they’re playing good or poorly, they have a following. And the following is not just in a certain geographic area. It’s across the country.”

Swarbrick acknowledged remaining independent will perpetuate, and maybe even grow, a revenue gap between Notre Dame and the schools it considers its peers, the ones that have a recent history of consistently competing for national championships.

“We have always accepted the reality that there’s a cost to independence, there’s a price that we pay for independence on the revenue side,” Swarbrick said.

How big can the gap get before it becomes too much for Notre Dame — with an endowment valued at more than $13 billion — to accept?