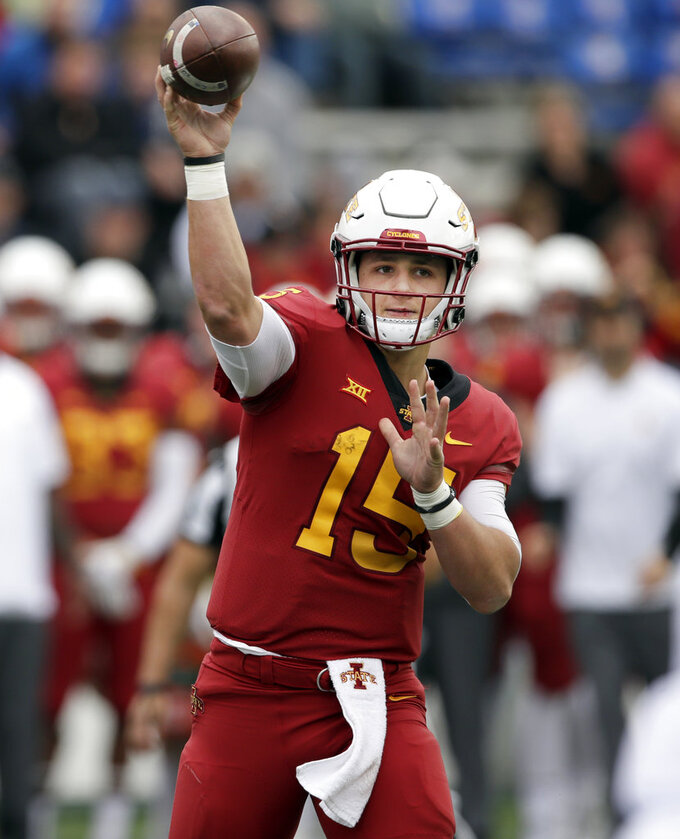 Iowa State quarterback Brock Purdy (15) passes to a teammate during the second half of an NCAA college football game against Kansas in Lawrence, Kan., Saturday, Nov. 3, 2018. (AP Photo/Orlin Wagner)

How the Cyclones handle their recent success will help determine if they can overcome a 1-3 start and be in the mix for a conference title.

The Cyclones have put themselves in position for the second spot in the Big 12 title game if they win out. Coach Matt Campbell wants his team to maintain the familiar "one game at a time" approach that has worked well during the streak.

"It's all fluff until the end of the season, where you kind of lay it all out and say 'What are we really, did we accomplish what we had the ability to be?'" Campbell said. "I think this group gets it, because having that start at 1-3, where everybody wants to tell you how not good you really are — and yet within our walls we knew how close we really were."

Like Iowa State, Baylor can become bowl eligible with a win on Saturday. It would be a milestone for the Bears, who lost 17 of 19 at one point as the program rebuilds under second-year coach Matt Rhule following a campus sex assault scandal.

"They played four quarters and that was our goal," Rhule said. "It wasn't always perfect. There was a lot we could have done better. But I am proud of their effort and intensity. Most of all I was proud of their togetherness."

The Cyclones allow just 19.3 points in conference games, not including non-offensive touchdowns — though there have been four of given up by Iowa State. Every opponent the Cyclones has faced has scored less than its season average, and four have failed to gain 300 yards.

"Some defenses you play you'll know if they're playing man-to-man or zone, they're blitzing," Rhule said. "These guys just do a great job of disguising. They're able to do it because of the way their players play."

The Bears are 91st nationally against the pass and 96th against the run, and Baylor gives up 5.5 yards a carry. With a wind chill expected to be in the low 20s, expect Iowa State to make standout running back David Montgomery the focal point of its attack.

Baylor sophomore Charlie Brewer came off the bench after time spent in concussion protocol to throw two touchdowns, including the game winner, last week. He is listed as a co-starter this week along with senior Jalan McLendon.

"I think it all centers around their quarterback, a really talented football player," Campbell said of Brewer. "I thought (that was) a really gutsy performance by him last week coming back into that game."

Iowa State quarterback Brock Purdy, a true freshman, has led an offense that is averaging 36.3 points during its winning streak. He's also won Big 12 Newcomer of the Week three times. ... Baylor scored 17 unanswered points and won 45-42 on a last-second field goal in 2016, its last trip to Ames. ... The Cyclones have had 15 different players record a sack in 2018.

"It's a team that is very similar to Oklahoma and TCU in terms of skill that really pops off the video." — Campbell said about the Bears.