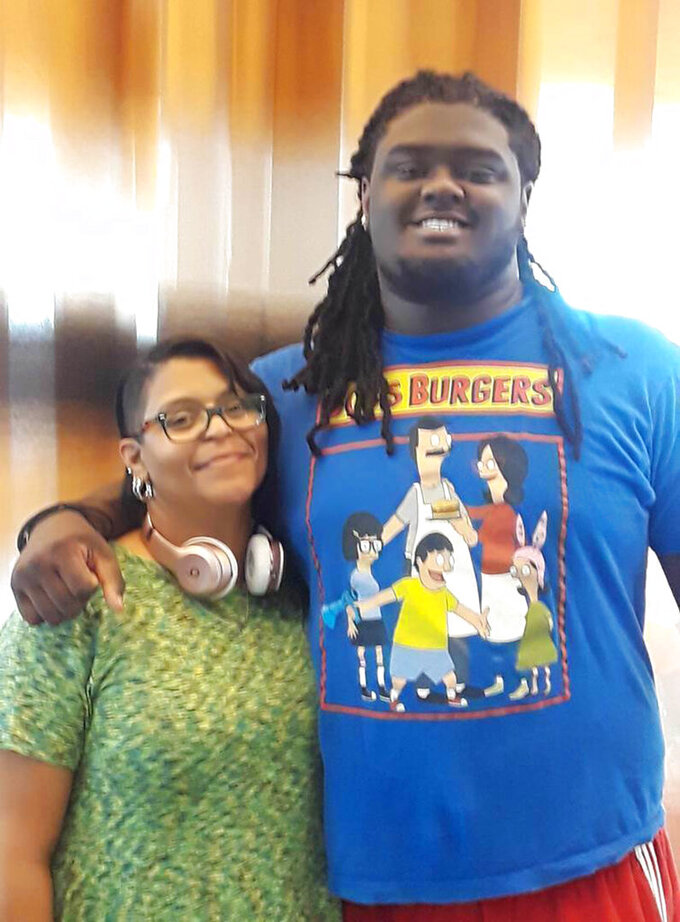 In this undated photo provided by Joanne Atkins-Ingram, Atkins-Ingram poses with her son Braeden Bradforth. An independent review of the heatstroke death of Bradforth, a 19-year-old football player who collapsed after the first day of conditioning practice at a Kansas community college, has found “a striking lack of leadership.” Bradforth, a 315-pound defensive lineman for Garden City Community College, was found unconscious on Aug. 1, 2018. The New Jersey native died that night. The report highlights a lack of oversight and a failure to assess athletes prior to the conditioning test, among other issues. (Courtesy Joanne Atkins-Ingram via AP)

WICHITA, Kan. (AP) — A scathing report following an independent investigation into the heatstroke death of a 19-year-old football player who collapsed after the first day of conditioning practice at a Kansas community college found “a striking lack of leadership.”

Braeden Bradforth, a 315-pound (140-kilogram) defensive lineman for Garden City Community College, was found unconscious in an alley outside his dormitory after practice on Aug. 1, 2018. The New Jersey teenager died that night at a hospital.

A serious lack of oversight set off a series of events that led to Bradforth’s death, according to the 44-page report by investigators, including sports medicine specialists Walters, Inc.

An attorney for Bradforth’s mother said Thursday that the family plans to sue the college, unless the school wants to discuss a settlement. Kansas attorney Chris Dove said it would be in the best interests of Bradforth’s mother’s mental and psychological state to not drag it out much longer.

“After a report like that, I just don’t know what they think their defense really is,” Dove said of the school.

School staff failed to assess athletes prior to the conditioning test and paid little attention to assessing Bradforth’s personal level of fitness, the report said. In particular, coaching staff didn’t consider if he had properly acclimatized to working out in summer temperatures at a higher altitude.

"A cause of death was a poorly designed and administered conditioning test for an unconditioned, non-acclimatized student-athlete at an altitude with 9% less oxygen than he was accustomed to at his home” in Neptune, New Jersey, the report said.

Investigators said there was a striking lack of leadership by the college’s then President Herbert Swender, athletic director John Green, then-head football coach Jeff Sims and head athletic trainer T.J. Horton in the weeks and months leading up to Bradforth’s death.

Vice President of Student Services Colin Lamb described a “toxic culture” at the college, and several witnesses said the atmosphere on campus was “one of dysfunction with little regard for best practices or appropriate procedures.”

Jill Greene, the mother’s attorney in New Jersey, called the report “our ammunition” if they sue.

The college declined to comment Thursday on the report, instead referring The Associated Press to Tuesday’s news release that outlined several changes taken by the college to improve practices in athletics since Bradforth’s death. Those include hiring a conditioning coach and third athletic trainer, as well as developing protocol for recognizing and treating heat-related illness.

The college said it is “hopeful that the report will serve to answer any questions that still remain for Braeden’s family and continues to extend condolences following the tragedy.”

Bradforth’s mother, JoAnne Atkins-Ingram, said she is thankful by the way the report was done, but said she was disgusted by some of the things in the report.

“It showed the level of insensitivity and to me I feel like they dropped the ball from the moment they picked up my son from the airport,” Atkins-Ingram said. “They stopped treating him like he was a human the moment he wandered off that football field.”

Investigators wrote that the college was not sufficiently prepared to ensure safety at practice or to deal with exertional heat illness. No college athletic training or coaching staff member and no emergency medical service or hospital emergency department personnel identified or treated Bradforth’s escalating symptoms of the heat stroke that caused his death, it found.

Bradforth’s core temperature was “never assessed and no effective method of cooling him was ever implemented,” the report said. “A contributing cause of death was the failure to timely identify and treat Braeden Bradforth’s exertional heat illness.”

A timeline included in the report detailed the 73 minutes that passed from the moment Bradforth left the stadium to his arrival at the hospital.

When treatment is administered within 30 minutes of the detection of heat illness, exertional heat stroke death can be averted, the report said. That treatment includes the rapid cooling by immersing the victim in cold water.

"An effective plan likely would have rescued him from what turned out to be his untimely death," the report said. "The response time and significant delays between multiple opportunities for effective treatment were a cause of death."

His mother said she still doesn’t understand how nobody knew to call 911 immediately.

“I found out how Braeden died, I found out where he died,” she said. “He didn’t have to die — that is the thing. This was completely preventable.”

Investigators said no one was able to say that Bradforth drank water before, during or after practice. But no one said any player had been denied water during the practice.

Teammates found Bradforth collapsed in an alley, according to emails obtained by The Associated Press through an open records request.

Assistant football coach Caleb Young told officials in one email that Bradforth was "making a stressful moan" when he arrived on the scene, but rather than immediately dial 911 he called Sims "for instruction to see how we wanted to handle the situation." Sims then directed him to call Horton.

The investigative report said players urged Young “to call the ambulance, call the police.” Athletes brought water to the alley and poured it on Bradforth’s head as the young man stuck out his tongue as if he was thirsty. He opened his eyes, but it was just a blank stare.

The college hired the investigators to conduct an independent review of the case under pressure from Bradforth’s family and the New Jersey congressional delegation.