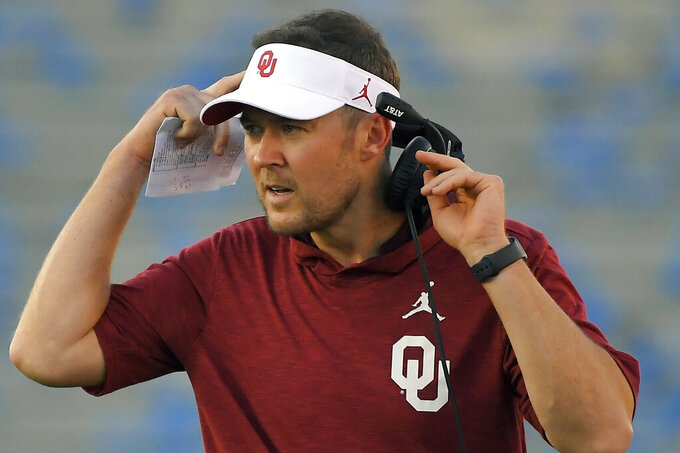 FILE - In this Sept. 14, 2019, file photo, Oklahoma coach Lincoln Riley stands on the sideline during the first half of the team's NCAA college football game against UCLA, in Pasadena, Calif. Baylor coach Matt Rhule and Oklahoma’s Lincoln Riley took over their teams under drastically different circumstances. Now they will coach against each other in the Big 12 championship game. (AP Photo/Mark J. Terrill, File)

WACO, Texas (AP) — Matt Rhule stepped into a volatile situation at Baylor, leaving his home in the Northeast to take over a program with a depleted roster in the aftermath of a scandal that led to the firing of a two-time Big 12 champion coach.

Lincoln Riley was the hand-picked successor at Oklahoma, the bright young offensive coordinator for the Sooners who got promoted when coach Bob Stoops surprisingly retired the summer after winning his 10th Big 12 title.

The head coaches who took over their teams under drastically different circumstances before the 2017 season are now meeting with a possible spot in the four-team College Football Playoff on the line. No. 6 Oklahoma (11-1, 8-1 Big 12, No. 6 CFP) and No. 8 Baylor (11-1, 8-1, No. 7 CFP) play Saturday in the Big 12 championship game.

“We obviously had to build this thing from the ground up,” Rhule said. “But (Riley), he had to maintain a championship culture. ... He took over for a legend, had to put together a staff while retaining staff and getting players to continue to keep doing what they were doing.”

The Sooners are going for their fifth consecutive Big 12 title, and trying to get to the playoff for the third year in a row since Riley took over as coach.

Baylor, which two years ago in Rhule’s debut had its only 11-loss season, will play for a Big 12 title three years to the day after his introductory news conference. With the work to be done, Rhule was initially given a seven-year contract — and that was extended earlier this fall through the 2027 season.

“He’s obviously done a tremendous job, coming out of some of the adversity that they had as a football program and university,” Riley said. “You don't do what they've done without that guy doing what he's doing and doing it at a high level. I certainly have a lot of respect for him and the job they've done.”

Oklahoma has won at least 11 games in each of the five seasons Riley has been with the Sooners, as offensive coordinator and head coach.

Baylor’s only other 11-win seasons came in 2013 and 2014, the Big 12 titles under Art Briles — the last times a team other than Oklahoma was the conference champ. Briles was fired in May 2016 during a sprawling scandal over how the school handled sexual assault allegations, including those against football players. The school’s president and athletic director were also gone soon after that.

Jim Grobe was Baylor’s interim head coach for the 2016 season before new athletic director Mack Rhoades, who had previously interviewed Rhule when hiring a new coach at Missouri, went back to the coach who had gone from a 2-10 debut at Temple to 6-6 and then consecutive 10-win seasons.

“He’s definitely been the captain of the ship,” junior quarterback Charlie Brewer said of Rhule.

“I think that everyone just bought in because he's a straight-up guy ... and he's really loyal and real relatable,” said Brewer, a third-year starter. “When players see how much he cares about us, that he's there for us no matter what, I think that just goes a long way in the relationships that he's built with everyone on our team to where it's more than football. Whenever that happens, it kind of creates one big family and people just have each other's backs.”

Baylor had 33 different freshmen or sophomores start games in Rhule’s first season, and only two FBS teams had more first-time starters than the 27 the Bears had while going 1-11. They improved to 7-6 last year with a bowl victory, and then had an 11-game winning streak until a home loss nearly three weeks ago to Oklahoma, which needed its biggest comeback ever to win 34-31.

Rhule said this week that he wasn’t interested in the Missouri job at the time because he wasn’t finished at Temple, where he had previously been an assistant for six years before one season in the NFL as an assistant offensive line coach for the New York Giants in 2012.

When Rhoades offered him the Baylor job, he felt the timing was right and he felt a calling.

“Nothing has been easy about the first couple of years here. I think it was really, really hard,” Rhule said. “A lot of credit to our players for hanging in there and battling through and not quitting, not giving up, not losing hope.”

Rhule said he knew right after the Bears beat Vanderbilt in the Texas Bowl last December that they were set up for a good season in 2019.

“We thought we were going to have a good team because we knew we had good players. We thought they were bought in and were learning and improving,” Rhule said. “We finished our third year at Temple, after going 6-6, we finished 10-2 at the end of the regular season, so we thought that we were on a very similar trajectory.”