From running back to rapper, Tre Hood stars at Temple 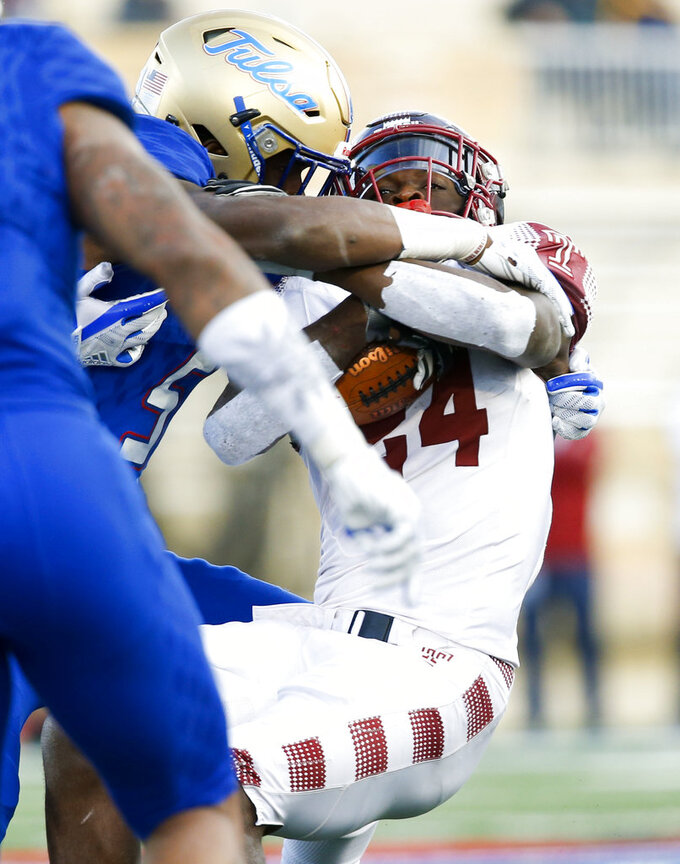 FILE - In this Nov. 25, 2017, file photo, Temple's David Hood, right, is tackled by the Tulsa defense during an NCAA college football game in Tulsa, Okla. Hood is set to take the field one more time. The running back-turned-rapper will perform at halftime on Thursday night, Sept. 20, at Lincoln Financial Field the new Temple sports anthem he wrote, called "Temple Made." (Jessie Wardarski/Tulsa World via AP, File)

PHILADELPHIA (AP) — Tre Hood last headlined for Temple at a bowl game bash on the beach. The Owls didn't have to look beyond the depth chart to book the star attraction for a team party.

Hood swapped the playbook for a microphone and spit some rhymes in Florida before the Owls played last December in the Gasparilla Bowl in Florida.

"The whole team, everybody was just lit," he said, laughing.

One of Hood's popular raps at Temple was a song called "Slide."

Hood would call out, "What are we going to do?!" and the Owls would yell "slide!"

For Hood and the Owls, "slide" meant to come through and show up in tough times and in the clutch.

Hood's performance in Temple's bowl victory would be his last football game — concussions would force him to quit with a year remaining. But the running back-turned-rapper is set to take the field — to slide — one more time with the Owls. Only instead of avoiding a big hit, Hood hopes he'll be rapping the next big one. Hood will perform at halftime Thursday night at Lincoln Financial Field the new Temple sports anthem he wrote called, "Temple Made ."

"This is my gift back to Temple for molding me into the man I am today," he said.

Hood name drops several Temple greats in the song and references a lyric from the Meek Mill song "Dreams and Nightmares" as an homage to his rap idol.

Grindin' for the family

Everyday I wake up

Grind 10th and Diamond take off on a Saturday

"All the lyrics are coming from the heart because it's what I've been through at Temple," Hood said. "The hard work, the grind, the pain, everything that I went through at Temple. It's been instilled in me so it was natural for me to let it out on the track."

The native of Atlantic City, New Jersey, arrived at Temple in 2014 a father , and balanced football with school and raising a son. His 4-year-old son David IV even tagged along with dad at summer workouts. His son is now his biggest fan and dances along to dad's raps. Hood said he's written hundreds of songs and has an untitled album that traces his journey from handoffs to hip hop set to drop in November.

Hood, who led the Owls in rushing last season, was on the sideline at Temple's spring game when he met up with university COO Kevin Clark. Clark encouraged Hood to stop by the studio at WRTI-FM, Temple's all-music public radio station, and record a sports anthem. Offered a chance to leave an indelible mark at Temple, Hood did what any good running back would do: "I just took my opportunity and ran with it."

He'll perform at halftime of Temple's game against Tulsa at the home of the Super Bowl champion Philadelphia Eagles with a recording track but hoped he could get the school band to perform with him at a basketball game.

Not only was Clark in Hood's corner, but Temple coach Geoff Collins has remained a steadfast supporter .

"Coach Collins is a big fan of my music," he said. "He actually is a big part of my transition from athlete to artist. He made my next steps feel more natural. I never knew how I would end up not playing football and going into music. It was like, 'football's over this is David Hood, he's now a big-time artist.' He made people see what I saw. I definitely respect Coach Collins."

This is no kitschy "Super Bowl Shuffle" dalliance for Hood. Music is his passion and he believes rapping can help make him a better person, a better father and maybe even make a difference for a Temple student needing a dose of inspiration to chase a dream.

Hood, who graduated in December, has performed on campus before, "but nothing of this magnitude."

This gig will mean a bit more, too.

"I'm ready to get back on the field with my brothers," he said.