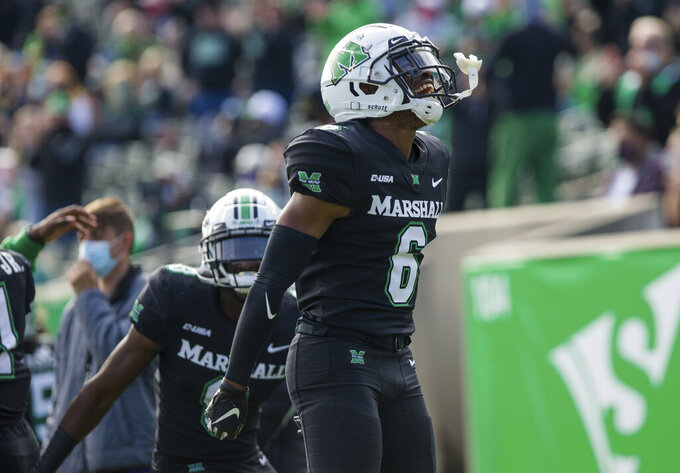 —Kyle Trask, Florida, threw for 356 yards and six TDs extended his school record for consecutive games with at least four touchdown passes to six and the No. 6 Gators overwhelmed Arkansas 63-35.

—Sam Howell, North Carolina, threw for program records of 550 yards and six TDs, and scored the go-ahead rushing TD with 4:11 left to help the Tar Heels rally past Wake Forest 59-53.

—Grant Wells, Marshall, threw for 325 yards and five TDs, and the No. 16 Thundering Herd commemorated the 50th anniversary of the worst disaster in U.S. sports history during a 42-14 victory over Middle Tennessee.

—Ian Book, Notre Dame, passed for three TDs and ran for another, and the No. 2 Fighting Irish overcame an early deficit to roll to a 45-31 victory over Boston College.

—Malik Willis, Liberty, threw for 306 yards and three TDs and ran for two more scores, leading the No. 22 Flames over Western Carolina 58-14.

—Sam Noyer, Colorado, passed for two TDs and ran for two more, helping the Buffaloes hold on to beat Stanford 35-32.

Kedon Slovis, Southern California, threw for 325 yards and a TD, and led a late scoring drive to help the No. 20 Trojans beat Arizona 34-30 to rally for a late victory the second straight week.

—Levi Lewis, Louisiana-Lafayette, passed for 252 yards and three TDs, and the No. 25 Ragin’ Cajuns clinched a third straight Sun Belt Conference West Division title with a 38-10 victory over South Alabama.

—Frank Harris, UTSA, accounted for a career-high five TDs in a 52-21 rout of UTEP.

—Jalen Cropper, Fresno State, had 202 yards and three TDs receiving in a 35-16 win over Utah State.

Quarterback Grant Wells grew up knowing the story of Marshall football. The 1970 plane crash. The university’s decision to continue playing. The winning years that eventually would come.

And the importance of representing the school and honoring the fallen on the crash’s big anniversary.

The redshirt freshman threw a season-high five touchdown passes and No. 16 Marshall commemorated the 50th anniversary of the worst disaster in U.S. sports history with a 42-14 victory over Middle Tennessee.

Marshall got another standout performance from its defense and turned three turnovers into scores on a day when the university remembered the 75 people killed on Nov. 14, 1970.

13_Years since Stanford lost its home opener before being beat by Colorado 35-32.

19_Years since Penn State last started a season 0-4 before this season.

24_Years since Northwestern's previous 4-0 Big Ten start before this season.

100_Wins by coach Brian Kelly at Notre Dame, tying Lou Holtz for second in program history. He is five behind Knute Rockne.

Notre Dame has a history of following big wins with letdowns against rival Boston College.

This time the Irish wound up making some history for their coach at the Eagles’ expense.

Ian Book passed for three touchdowns and ran for another and the second-ranked Irish overcame an early deficit to roll to a 45-31 victory over BC.

The Fighting Irish’s eighth straight win in the series between FBS’s only Catholic institutions gave coach Brian Kelly his 100th career victory at the school, tying him with Lou Holtz for second — five behind coach Knute Rockne.