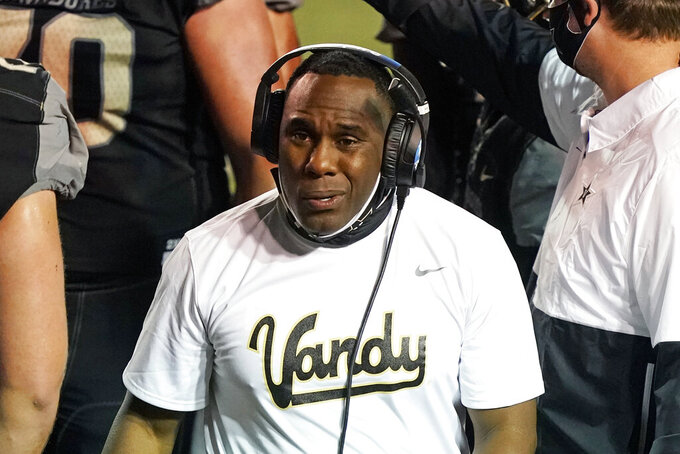 Vanderbilt head coach Derek Mason watches from the sideline in the first half of an NCAA college football game against LSU Saturday, Oct. 3, 2020, in Nashville, Tenn. Southeastern Conference officials continue adapting to navigate setbacks in their pursuit of a league title and possible national championship. “We hope to get through the end of the season," Vanderbilt coach Derek Mason said of the SEC. "But I’m not a soothsayer, and I don’t have a crystal ball. I’m just trying to go day to day, week to week.”(AP Photo/Mark Humphrey)

Commissioner Greg Sankey and the Southeastern Conference have their finish line in sight: The league championship game is set for Dec. 19 in Atlanta.

The division champs might not be the only SEC teams playing that day.

The SEC came into this season with a contingency plan to deal with coronavirus-related issues. While those plans have been severely tested as the pandemic has wreaked havoc, SEC officials continue adapting to navigate setbacks in pursuit of a league title and possible national championship.

“We hope to get through the end of the season," Vanderbilt coach Derek Mason said of the SEC. "But I’m not a soothsayer, and I don’t have a crystal ball. I’m just trying to go day to day, week to week.”

The SEC tried to protect itself, member schools and TV partners by including open dates as part of its 10-game, league-only schedule. Part of that contingency was using Dec. 12 as an extra week.

Eight SEC games have been postponed already with only Arkansas, Kentucky and South Carolina not affected — yet. LSU, Missouri and No. 5 Texas A&M each have had two games postponed, including the Aggies game Saturday against Ole Miss being delayed Monday.

The league-wide open date is also being used with three games now are slotted as make-ups for Dec. 12.

League officials also announced Ole Miss-Texas A&M, originally picked by CBS for its SEC game for Saturday, could be made up Dec. 19 if the Aggies aren't playing for the league title that day. Back-to-back postponements aren't helping Texas A&M (5-1) catch top-ranked Alabama (6-0) in the Western Division.

“Life is about changes,” Texas A&M Jimbo Fisher said. “It’s about adaptation. It’s about making the best out of situations.”

Making sure all SEC teams play a full 10-game schedule might not be possible.

“Obviously, we can’t predict the future,” Tennessee coach Jeremy Pruitt said. “I believe we all knew when we started this, that there were no guarantees.”

The number of positive COVID-19 tests needed to stop games have varied:

— Two Aggies and a staff member at Texas A&M

— More than 30, including Dan Mullen at Florida, with another positive test result within the past week

Neither Vanderbilt nor LSU detailed its numbers. Alabama had coach Nick Saban and athletic director Greg Byrne test positive, though Saban was cleared by a third negative test and was on the sideline days later against Georgia.

“Well, we really have never revealed how many guys we’ve had test whatever,” Saban said. “It’s not something that we really want to start now.”

Contact tracing has been the bigger issue. The Aggies have been hit hard with Fisher saying he has only 40-something scholarship players available for practice this week. That's the number Mason estimated he had at practice after Vanderbilt's game at Missouri on Oct. 17 became the first SEC game postponed.

Luckily, Mason had plenty of offensive players available for a freshman quarterback, and his Commodores now have three straight games with at least 407 yards total offense for the first time since 2016.

LSU took advantage of Florida's COVID outbreak, by p ushing a game set for Oct. 17 to Dec. 12 it gave the Tigers time to get two freshmen ready to replace injured quarterback Myles Brennan. That extra time paid off with a 52-24 rout of South Carolina.

Pruitt said the time off has help Tennessee be as healthy as the Vols have been in a long while.

But the Tigers' own outbreak postponed last week's home game with Alabama. Not only did CBS miss its weekly SEC game that led to revenue loss for both the league and the network, LSU also might lose the game completely if Alabama makes it to the title game in Atlanta on Dec. 19.

LSU Coach Ed Orgeron said he knows this is a fluid situation, but wants to play the game.

“I do believe that Alabama and LSU ought to play this year, and I do believe we’re going to play somehow, some way,” Orgeron said.

Florida visits Vanderbilt on Saturday for the fifth-ranked Gators' first road trip since a 41-38 loss at Texas A&M on Oct. 10. That's where the Gators believe their outbreak started, so they have made several changes hoping to keep themselves safer.

Players and team officials will have assigned seating at every meal to make contact tracing easier. No food or drinks will be available on the flight to Gainesville to Nashville or the return flight to Florida, and everyone will keep their masks on. Mullen also doesn't want his Gators spending much time in Vanderbilt Stadium's small locker room.

“Unfortunately I’ve been to Vanderbilt, so I know the visiting locker room situation,” Mullen said. "We’re going to change our entire pregame routine to try to really limit the amount of time that we would ever spend in the locker room.”

After Saturday, the SEC may reschedule games giving teams only five days' notice to squeeze in as many games as possible.

Mullen said he has a notebook full of tidbits on various teams if Florida has to prepare for a different opponent on short notice. But that doesn't mean sudden changes don't lead to at least some angst and chaos.

“Every time you test, you’re hoping that everything turns out okay, so that you can have your players available,” Malzahn said. "I don’t think there’s any such thing right now as far as being comfortable.”

At least not until this SEC season wraps up.