SEC will wait: New coach and new QB for Texas in Big 12 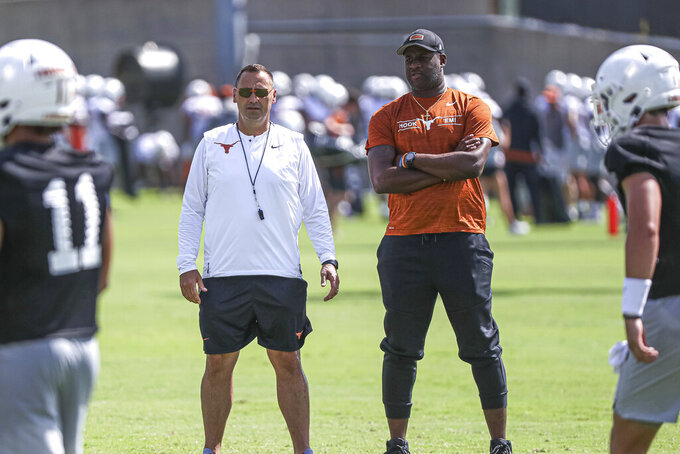 AUSTIN, Texas (AP) — A new coach, a new quarterback and a new conference. Well, that last part doesn't apply to No. 21 Texas just yet.

The eventual move to the Southeastern Conference by the Longhorns and Oklahoma set off a summer earthquake across the college football landscape when it was decided. But that's for future seasons when Texas hopes it has shaken off years of underachieving.

For 2021, the Longhorns are still in the Big 12, still trying to conquer Oklahoma and now trying to catch up to Iowa State in hopes of winning their first league crown in a decade.

Those hopes lie with a new coach. Texas fired Tom Herman after four winning but still mostly disappointing seasons, and plucked Steve Sarkisian from Nick Saban's staff at Alabama. Sarkisian brought a group of former Crimson Tide assistants with him.

Texas gave Sarkisian, a former head coach at Washington and Southern California, a guaranteed six-year, $34 million contract that should take him into the eventual move to the SEC planned for 2025, if it doesn't happen sooner.

And if Texas' patience doesn't run out sooner, like it did on Herman.

Running back Bijan Robinson was the breakout player of Texas' final two games last season with 355 yards rushing with an incredible 18.7 yards per carry. Sarkisian promised to get him the ball more than Herman did. A lot more. Sarkisian even compared Robinson to former USC running back Reggie Bush, who Sarkisian coached as Trojans assistant.

“The biggest thing Bijan resembles to Reggie Bush is the one-cut ability,” Sarkisian said. “I hadn’t seen that for quite some time, the ability to make that full-speed, violent one cut, not lose top speed and get vertical, and Bijan has that.”

Casey Thompson was supposed to be the easy choice at quarterback after four years of Sam Ehlinger. Hudson Card has made him work hard for it. Thompson was flawless in last season's relief appearance in the Alamo Bowl with four touchdown passes. Yet Card made it an all-out competition in the spring and has kept up the pressure in training camp. He could even steal the job.

“I wanted them to make it hard on us,” Sarkisian said, “and they’re doing just that.”

Defensive tackle Keondre Coburn is the anchor up front for the Longhorns defense. Alfred Collins is the potential star. A former 5-start recruit, the 6-foot-5, 300-pound Collins got his first start in last season’s Alamo Bowl and had five tackles, a pass breakup and even an interception.

The Texas defense could get a boost from a group of transfer linebackers. Ben Davis from Alabama and Ray Thornton from LSU were with national championship programs. Ovie Oghoufo played on last year’s Notre Dame team that made the College Football Playoff.

All three left those programs after limited playing time, but all "know how to win,” Coburn said.

Texas will be tested early. The schedule includes a season-opener against an experienced Louisiana team on Sept. 4, and the annual matchup with Oklahoma in Dallas on Oct. 9. If Texas is still in the Big 12 title chase after October, a Nov. 6 trip to Iowa State may settle it.