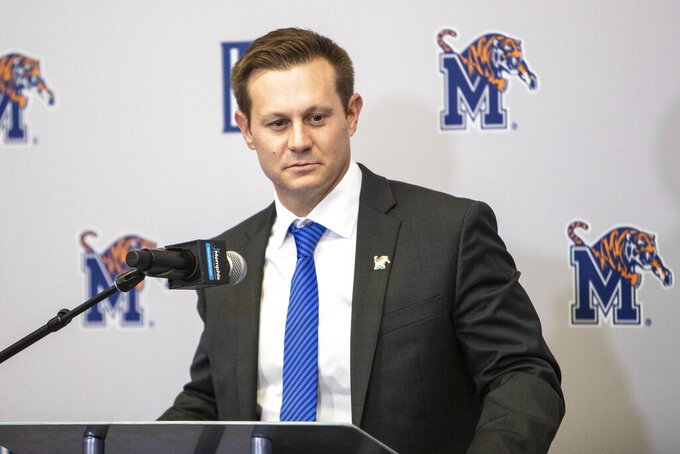 ARLINGTON, Texas (AP) — Ryan Silverfield has been coaching for 20 years, first for a Florida prep team as a teenager the season after being part of his second state championship there as a player.

He then coached instead of played during four seasons while at Hampden-Sydney College in Virginia. There were stops at four other colleges in various roles, and six seasons as an assistant for the NFL’s Minnesota Vikings before going to Memphis as part of coach Mike Norvell’s staff in 2016.

Now Silverfield is head coach of the Tigers, and his first game in that role comes in their first New Year’s Six bowl game. He is the first coach to make his debut in one of those games in the six seasons since the College Football Playoff selection committee started setting those matchups.

“This is heck of a way to start my head coaching career at the college level,” Silverfield said Thursday, two days before No. 15 Memphis plays No. 13 Penn State in the Cotton Bowl.

“I couldn't have asked for it to happen any other way,” he said. “Obviously, I give a lot of credit to Mike Norvell for the opportunity for me to come to Memphis and introduce me to such a wonderful city, a wonderful university and such a great football program.”

When Norvell became Florida State's coach this month, after the Tigers (12-1) won the American Athletic Conference championship game and before getting their official bid to represent the Group of Five teams in the Cotton Bowl, Silverfield was named interim coach.

It took less than a week, after a national search, before Memphis took away the interim tag and made the 39-year-old Silverfield its 25th head coach on Dec. 13.

“It’s huge for a lot of the guys because we really feel like we’re a family and we just wanted to keep it close knit,” junior linebacker Thomas Pickens said.

Junior quarterback Brady White came to Memphis before last season as a graduate transfer from Arizona State, where Silverfield was an offensive analyst for part of 2015 before finishing that season with the NFL's Detroit Lions and then going to Memphis.

White described Silverfield as a “critical piece” to Memphis’ success under Norvell, including a school-record 12 wins this season, 38 wins in its best four-year stretch and the first outright conference title since 1969.

“He's just a genuine dude that cares and wants the best for all of us, and wants to win at the end of the day. And he is a winner,” White said. “We're excited to have him at the helm. I know he's going to do great things, not just this bowl game and in the near future, but in the years to come for Memphis.”

Silverfield's only previous head coaching job was in 2004, at a high school in Georgia during a season when he was only 24 years old.

When the school's athletic director first met with the players after Norvell's departure, they were asked to write on cards what they wanted in a coach. Many of them listed different qualities. Others simply wrote down Silverfield's name.

He had been deputy head coach and offensive line coach under Norvell. Now Silverfield will try to continue to build on the success the Tigers have had.

“Our culture, the things we do, the standards we've set, are not going to change. In fact we're going continue to get better and grow stronger,” Silverfield said. “This is heck of a testament to what we built in the past, but we're moving forward in the right direction.

“The players are all in. We've been using that mantra since I was able to take over as the head coach. And when we talk about an all-in approach,”he said. "It's not just on the football field, but in everything we do."

Senior center Dustin Woodard has started 51 consecutive games for the Tigers in his four seasons, so he has spent more time with Silverfield than most of his teammates.

“He comes with it every day. He tries to get the most out of you. We're gonna work hard every single day. We're not going to take days off,” Woodard said, describing the new head coach's approach. “But at the same time, we're enjoying the process, enjoying the time.”