Soldier Field showdown is another Chicago chapter for Irish 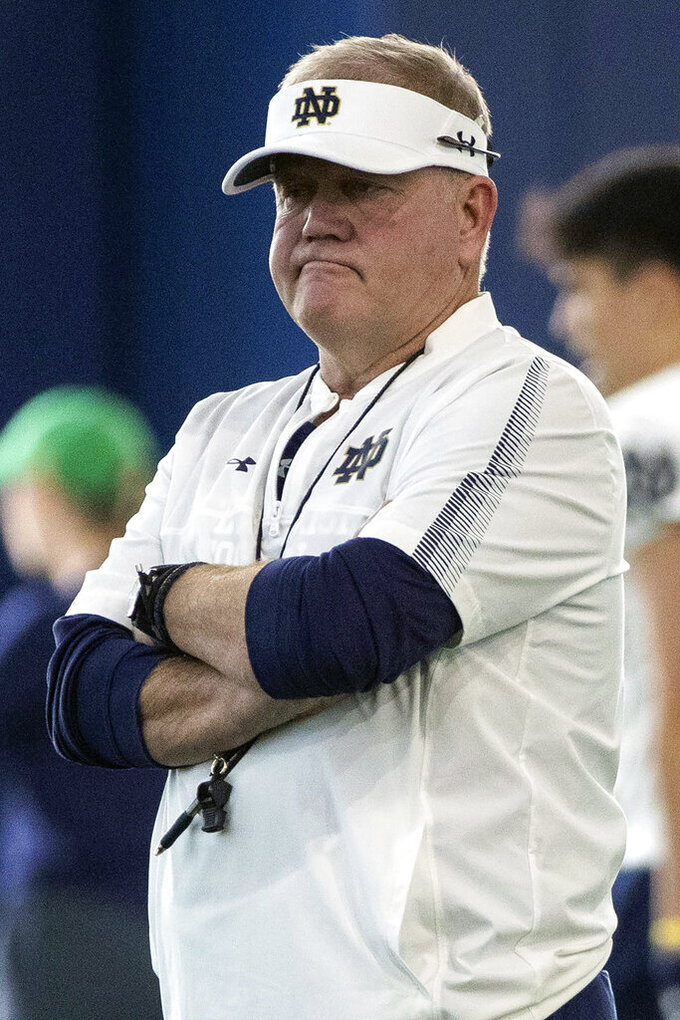 FILE - Notre Dame head coach Brian Kelly looks on during Notre Dame fall camp in South Bend, Ind., in this Saturday, Aug. 7, 2021, file photo. No. 12 Notre Dame travels to Chicago this weekend to play No. 18 Wisconsin at Soldier Field. It is another chapter in the long history of connections between Chicago and Notre Dame athletics. The most famous coach in Fighting Irish history, Knute Rockne, was raised in Chicago. Dozens of Chicago natives have played for Notre Dame and a few have come home to play for the NFL's Chicago Bears. Current coach Brian Kelly has a chance this weekend to go ahead of Rockne as Notre Dame's winningest coach. (John Mersits/South Bend Tribune via AP, File) 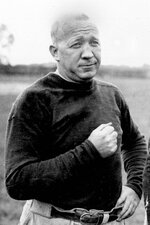 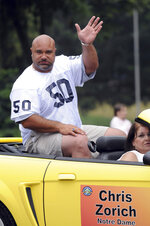 SOUTH BEND, Ind. (AP) — During the construction of Notre Dame Stadium in 1929, the Fighting Irish football team needed a temporary home venue — one close enough and grand enough to accommodate the program’s growing fan base.

They found it in Soldier Field, a then-new stadium 100 miles to the west on the shore of Lake Michigan. At the time, team and venue were young and relatively untested; Notre Dame’s sole national title at that point had been claimed in 1924, the same year Soldier Field opened.

On Saturday, the No. 12 Irish return to Soldier Field to play No. 18 Wisconsin. It marks Notre Dame’s 13th game in the venerable stadium — they currently hold a 10-0-2 record — with the most recent matchup coming against Miami in 2012.

Tim LeFevour, the general manager of Soldier Field, fondly recalled the fanfare of the 2012 game.

“It is like putting a bowl game on every time we are fortunate enough to have Notre Dame come to Chicago and play here,” he said. “It doesn’t feel like a regular game — it always feels special.”

The matchup is unique in another sense: With a win, coach Brian Kelly would move ahead of Knute Rockne to become the all-time wins leader in Notre Dame history. And he would do it in the stadium the Rockne-led Irish called home for that 1929 season — a stadium in the city where Rockne was raised before building Notre Dame into one of college football's greatest programs.

This weekend's game is part of Notre Dame's Shamrock Series of games played at neutral venues. The Fighting Irish are 9-0 in those matchups but are a 6 1/2-point underdog in this one.

“The Shamrock games are important to them,” Kelly said of his players. “They see them a little bit differently, especially when you’re playing close to home in Chicago, they know the history there.”

Indeed, the close connections between Notre Dame athletics and the Windy City date back more than a century. The familiar “Chicago’s team” moniker for the Fighting Irish — irksome to some, beloved by others — has roots in the slew of Rockne-era ties.

In 1893, when Rockne was a child, his family moved from Norway to Chicago’s Logan Square neighborhood, where Rockne lived until enrolling at Notre Dame in 1910. Throughout Rockne’s coaching tenure, the Irish played at Soldier Field seven times.

Over the following decades, many young Chicago football players have taken the two-hour trip east to join the Irish. A smaller, steady stream of Notre Dame players have made the opposite trek to play for the Chicago Bears. Some, like Chris Zorich, did both. Zorich, a defensive tackle on Notre Dame’s 1988 national championship team, was raised on Chicago’s South Side and spent five years with the Bears.

Notre Dame is represented on the current Bears roster by Alex Bars, Sam Mustipher and Cole Kmet, a native of the Chicago suburb of Lake Barrington.

Twenty miles down the road from Lake Barrington is Lake Forest High School, home of Fighting Irish offensive coordinator Tommy Rees, as well as two current members of Notre Dame’s roster: Rylie Mills and Eddie Scheidler. When Mills signed in December 2019, Rees said the recruiting visit took him “around the corner” from his childhood home.

Rees was the backup quarterback to Everett Golson the last time Notre Dame played in the Bears’ home stadium. Nine years later, Rees is in his second season as the Irish offensive coordinator and will face the Badgers with an offense led by Wisconsin’s own former quarterback, Jack Coan.

On Saturday, Notre Dame’s 3-0 start and unbeaten Soldier Field legacy will be put to the test. Kelly will get his first chance to become the winningest coach in program history — in a city that’s been an integral part of it.

“Chicago is a great base for us and Notre Dame fans,” Kelly said. “So we’re excited about that opportunity and certainly the challenge of playing a very good Wisconsin team.”