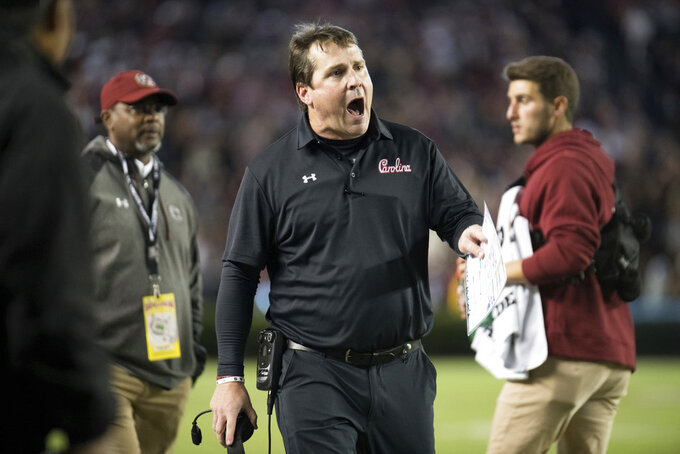 South Carolina head coach Will Muschamp, center, shouts at an official during the second half of an NCAA college football game against Tennessee, Saturday, Oct. 27, 2018, in Columbia, S.C. (AP Photo/Sean Rayford)

COLUMBIA, S.C. (AP) — South Carolina quarterback Jake Bentley can't understand why he and the Gamecocks start so slow and finish so strong.

He's just glad they do.

"It's just the resiliency of this team, that we're going to keep fighting," Bentley said Tuesday.

The Gamecocks have trailed at halftime in five of their six SEC games, yet rallied to victory in two of their past three league contests including a 27-24 win over Tennessee after falling behind 21-9 in the third quarter.

Bentley has tuned out the boos at home games and stayed away from social media critics. He has gotten support from teammates who tell him to stay strong and keep working hard.

"It's something that's helped me," he said.

There's little question Bentley seems more productive in the second half; five of his seven touchdown passes in SEC games have come after halftime.

Plenty of South Carolina fans have been frustrated, too. They expressed their dissatisfaction when the Gamecocks trailed Texas A&M and Tennessee at the break.

Those are the times when Gamecocks left tackle Malik Young sees Bentley's resolve and leadership coming through.

"He's got that competitive spirit," Young said. "that when we're down, he's got to do something to put us back in the game."

That's what Bentley did against Tennessee. He led the Gamecocks to three consecutive scoring drives in the third and fourth quarters to turn a 12-point deficit and into a 27-24 lead.

Bentley entered his junior season on all the watch lists for college football's major quarterback awards. His play has so far not lived up to that level. He's seventh in SEC passing yards per game and not among the top 10 in pass efficiency.

Bentley's eight interceptions are the most among the SEC's top 10 leaders in passing yards.

"There's no concrete answer," said Bentley, who has worn a brace on his left knee since getting hurt at Kentucky last month and missing a win over Missouri on Oct. 6. "We're going to keep trying and figuring out what we can do."

Gamecocks coach Will Muschamp and his offensive staff have broken down game tapes and analyzed practices to diagnose what's gone wrong early.

"We've exhausted a lot," Muschamp said. "It's unfair to say it's on one person. (Bentley) plays extremely well in pressure situations, but other people have to play well, too. I would say it's what do we need to improve to have better starts."

The Gamecocks may not want to fall behind Ole Miss, who are second in SEC offense (537.9 yards per game) and third in scoring (38.4 points).

Rebels coach Matt Luke said his team must focus on stopping the run (the Gamecocks are 12th in SEC rushing at 163.7 yards) to limit South Carolina's effectiveness passing.

"They're best at being able to run the football and play action, so I think that's the key to them," Luke said.

But if fans purchase a ticket and decide to boo, "that's fine, all good," Muschamp said.

Bentley hopes he can play consistently well all game to turn those frustrations into loud cheers.

South Carolina left guard Zack Bailey said the best way to end the offensive questions is also the most obvious: Play better in the first and second quarters.

"We have to change that," Bailey said. "That's on us as an offensive line and the rest of our team. We have to do that."