Southern Miss interviews Art Briles, decides not to hire him 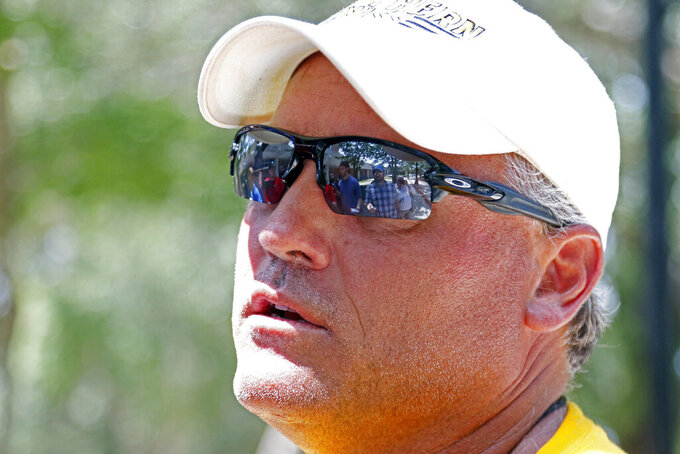 Southern Mississippi administrators and football coach Jay Hopson disagree on whether the school should hire former Baylor head coach Art Briles for a position on the Golden Eagles' football staff.

Hopson believes they should.

President Rodney D. Bennett and interim athletics director Jeff Mitchell say no — and they have the final say.

The school released a statement Wednesday morning from Bennett and Mitchell confirming that the school had met with Briles but that "following that meeting, we informed him that he is not a candidate."

Hopson released his own statement just minutes after the school's release, saying that he respects the president's decision, but disagrees with it and that Briles "deserves a second chance."

Southern Miss has been searching for a new offensive coordinator.

The 63-year-old Briles, who led the Bears to consecutive Big 12 titles in 2013 and 2014, was fired after an external investigation revealed in May 2016 that Baylor had for years mishandled numerous sexual assault allegations by students, including some against football players.

Baylor is still waiting for the outcome of an NCAA investigation into the school's conduct. Even so, Hopson was willing to hire Briles.

"He is a man that seemed sincere & humble in his interview & personally he committed no crime," Hopson said in his text message statement. "He may not have acted in the proper protocol, but that would be my JOB at Southern Miss! He was interviewing for an assistant position, even though I believe he will be a Head Coach at a Major Program in the near future."

This is not the first time there has been disagreement within an organization about Briles since his firing at Baylor.

When Briles was scheduled to be part of a breakout session at the American Football Coaches Association convention last year, criticism on social medial prompted the organization to cancel his participation in a session called "Standing Strong/Game Management."

That came only months after he was hired as an assistant coach by the Hamilton Tiger-Cats of the CFL, who the same day backtracked amid public pressure and eventually said he wouldn't join the team.

The coach, who was paid $15 million by Baylor to settle his contract when he was dismissed there, went to Italy last fall to coach an American football team there.

In eight seasons at Baylor, Briles transformed the Bears from perennial last-place finishers to back-to-back Big 12 titles, including being on the verge of the first College Football Playoff and a possible national title chance in 2014. The Bears won 50 games his last five seasons.