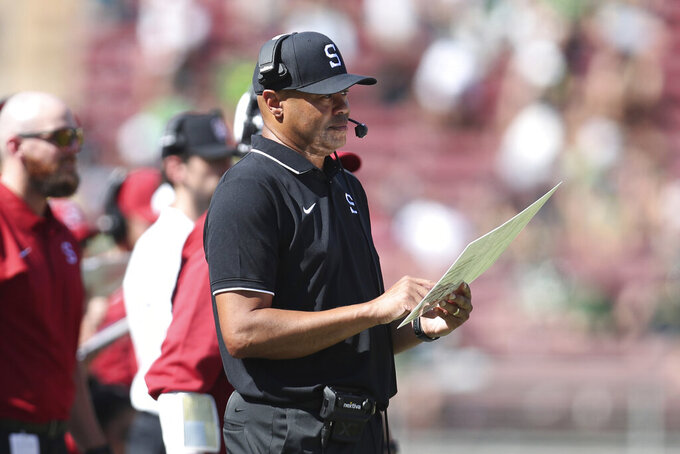 GAME OF THE WEEK: Stanford (3-2, 2-1 Pac-12) at No. 22 Arizona State (4-1, 2-0). Both teams are coming off impressive wins. The Cardinal took down No. 8 Oregon 31-24 last week after scoring on an untimed down on the final play of regulation. The Sun Devils picked up one of their biggest wins under coach Herm Edwards, knocking off then-No. 20 UCLA 42-23. Stanford has won six of seven in the series and has already beaten two ranked opponents this season, taking down the Ducks and Southern California.

MATCHUP OF THE WEEK: Utah (2-2, 1-0) at USC (3-2, 2-2). The Trojans have gone 9-1 all-time against the Utes in Los Angeles, their only loss coming in 1916. Utah had an extra week to prepare, getting a bye last week after beating Washington State. Southern California is coming off a 37-14 win at Colorado in which quarterback Kedon Slovis threw for three second-half touchdowns. The Trojans are seeking consecutive wins for the first time this season.

INSIDE THE NUMBERS: California, Colorado, Oregon and Washington have bye weeks. ... Arizona has lost a school-record 15 straight heading into Saturday's game against UCLA. ... UCLA WR Kyle Philips has TD catches in four straight games. ... Arizona State is fourth in the FBS with 7.23 yards per play. ... Utah LB Karene Reid had 15 tackles against Washington State in his first career start, becoming the fourth FBS player since 2012 to have at least 15 tackles in their first career game.

UPSET WATCH: Washington State (2-3, 1-2) over Oregon State (4-1, 2-0) . The Beavers have been one of the early surprises of the Pac-12 season, leading the North Division and with a road win over USC on their resume. Oregon State is 3 1/2-point favorite according to FanDuel Sportsbook, but the Cougars have won seven straight in the series. They're also one of the nation's best at forcing turnovers, ranking 11th in the FBS with 11.