Storey set to return at QB when Arkansas hosts Vanderbilt 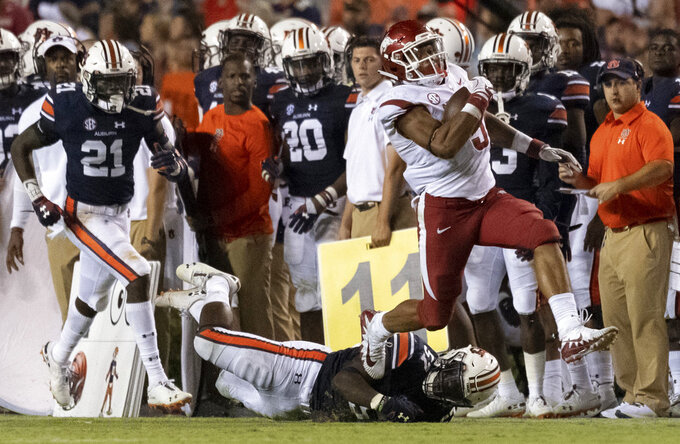 FAYETTEVILLE, Ark. (AP) — Ty Storey waited more than three years for his chance as the starting quarterback at Arkansas, and he didn't like missing last week's win over Tulsa because of injury one bit.

The junior is healthy once again following a physical beating against Mississippi two weeks ago, and he is expected to return when Arkansas (2-6, 0-4 Southeastern Conference) hosts Vanderbilt on Saturday.

"I feel 100 percent normal," Storey said. "It feels really good, just being back out there at practice and being able to be out there with those guys. It's a better feeling than having to sit out and watch them."

Storey's return will provide an immediate boost for the Razorbacks, who snapped a six-game losing streak a week ago in a 23-0 win over Tulsa. Arkansas is still in search of its first SEC win under first-year coach Chad Morris — something the Razorbacks hope to pull off against the Commodores (3-5, 0-4).

Vandy has lost to No. 3 Notre Dame, No. 7 Georgia, No. 9 Florida and No 12 Kentucky — one of the more challenging schedules in the country.

"Four of our five losses are to top 15 ranked opponents," Vanderbilt coach Derek Mason said. "When you look at (Arkansas') record, they've had some tough losses and close ballgames."

The Commodores are very happy to get Ke'Shawn Vaughn back after thinking the running back might return last week against Kentucky from an injury that knocked him out of Vanderbilt's loss to Florida on Oct. 13. Mason said Vaughn now has been cleared to return, and the coach said it'll be nice to have Vaughn back "considering we need every weapon possible." Vaughn is the Commodores' leading rusher, averaging 6.9 yards per carry and 70.7 yards per game, and he had eight touches for 131 yards before being hurt against the Gators.

Rakeem Boyd finished with 99 yards rushing against Tulsa last week, leaving the Arkansas running back one yard short of reaching 100 yards rushing in three straight games. The sophomore leads the Razorbacks with 502 yards rushing this season and is averaging 6.7 yards per carry in his first season after transferring from junior college.

These programs have not met since 2011 when Arkansas edged Vanderbilt 31-28 in Nashville, and the Commodores are lucky this game is in Fayetteville where they've split the first four games between the teams in Arkansas. The Razorbacks are 5-0 when playing Vanderbilt in Nashville.

Arkansas running back Chase Hayden will play despite the death of his grandmother earlier in the week. The sophomore has 182 yards rushing on 50 carries this season and is the Razorbacks No. 2 option in the backfield with Devwah Whaley out until late in the season following ankle surgery. "After the game Saturday, he'll go back and spend time with the family," Morris said.

Mason wants to see the Commodores find a way to finish games by making the plays to convert fourth downs like the one Vanderbilt fumbled on last week in losing to Kentucky. They also blew a 21-3 lead in losing to Florida on Oct. 13. "Somebody's got to stand up, stop looking at one another and let's stand up," Mason said.