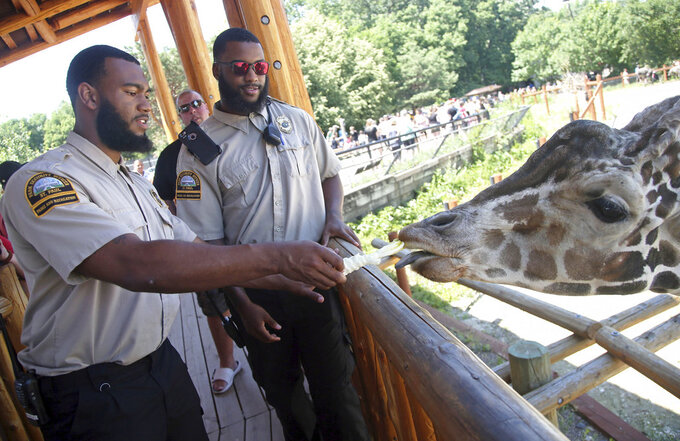 In this July 6, 2018, photo, University of Minnesota football players Jerry Gibson, right, and Winston DeLattiboudere feed a giraffe while working as security guards this summer at the Como Park Zoo and Conservatory for the city of St. Paul, Minn., a few miles from the university campus. One of the Gophers coaches connected them to the opportunity. (AP Photo/Jim Mone)

ST. PAUL, Minn. (AP) — Winston DeLattiboudere and Jerry Gibson, as defensive ends for Minnesota, will be engaging their share of daunting blockers on the field this fall.
Those oversized and overpowering offensive linemen in the Big Ten were the least of their worries one day this summer, when a 16-foot, 2,000-pound creature approached them in search of an afternoon snack.
"Is he going to eat the whole stick? Is he going to lick my hand?" DeLattiboudere wondered aloud with amusement and a bit of anxiety about whether Skeeter, the 9-year-old giraffe at the Como Park Zoo and Conservatory, would stick to the leaves and lettuce being offered or become more interested in chewing on his fingers.
No digits were damaged that day at the feeding station . The interaction with the world's tallest animal was merely another memorable and rewarding encounter on the job for these good friends and Gophers teammates who worked as security guards at the zoo before fall camp began. Gibson was locking up one evening when a gorilla startled him by throwing a branch at a nearby net, but otherwise the experience was all smiles and sunshine.
"I like it because you're an authority figure here," Gibson said. "The way you present yourself, that's how people respect you at the zoo. Then people come looking for help from you, instead of seeing you as somebody who just wants to be mean to them and get them in trouble."

DeLattiboudere and Gibson are both bearded and 6-foot-3, listed at 250 and 260 pounds, respectively. These lookalikes carried a commanding presence in their beige uniforms, though rarely recognized amid the crowds as college football players. Sometimes they were stationed in the visitor's center, answering questions, giving directions or deterring trouble in the nearby gift shop. Other times, they patrolled the parking lots, perhaps issuing a citation or two for cars in the wrong places. Mostly, they strolled through the exhibits to be with the people.
"It's being personable enough to be able to talk to somebody and get them to understand, but also being able to come to a solution together," DeLattiboudere said. "I just want to see what's going on. I want to see how we can resolve the problem so everybody can enjoy this atmosphere."
Gibson, a fourth-year senior from the Mobile, Alabama, area, had previously worked in security for events on campus at TCF Bank Stadium so the job struck him as a good fit. DeLattiboudere, a third-year junior from just outside of Baltimore, has looked up to Gibson since he joined the team so he figured he'd follow his friend. The opportunity was presented by Norries Wilson, the team's director of player development. An email from Randy Graff, the supervisor of safety and security for the city of St. Paul, to a friend of his on the university police force made its way to the football office.
"These guys called me literally five minutes after I sent it out," Graff said.
They were so professional and well-dressed upon their initial arrival at the zoo that the front desk staff encouraged Graff to hire them on the spot. Their interviews confirmed the hunch.
"Great attitudes, very personal, very outgoing," Graff said. "They've really taken this position and run with it. As a supervisor, I couldn't be any happier."
DeLattiboudere, who took a summer statistics class, usually worked 20 hours per week over Friday, Saturday and Sunday shifts. Gibson, who already has his undergraduate degree in business and marketing education, was able to pick up extra hours during the week.
Slogan-slinging Minnesota coach P.J. Fleck has put many messages on repeat to the public and to his players, and the pillar of those is to be "elite," academically, athletically, socially and spiritually. This summer job at the zoo for his defensive ends was precisely what Fleck has in mind.
"He teaches us to respect ourselves first, but then also to respect other people no matter what color their skin is, their religion, their background," DeLattiboudere said. "You know we're all people at the end of the day, so it doesn't matter where you come from or what you do."
___
For more AP college football coverage: https://apnews.com/tag/Collegefootball and https://twitter.com/AP_Top25